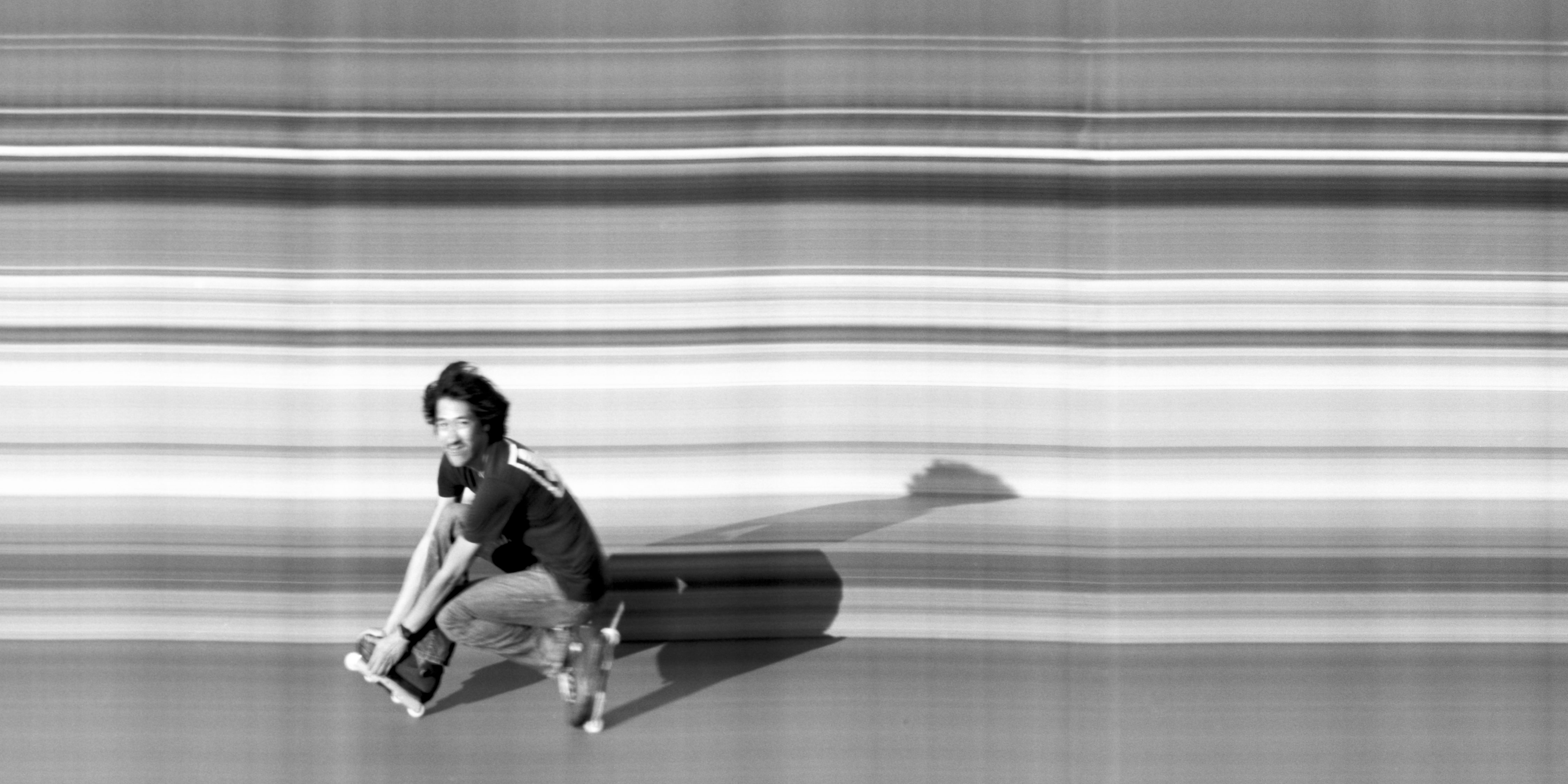 UP AND COMING | ATIS PUAMPAI

If you have been active on rollerblading’s social media sites within the last few years you might have been a witness to the jaw dropping videos from Hawaii’s Atis Puampai. His “If You Can’t Dance, Rollerblade.” video series have shown that Atis’ is a man with a different thought process when it comes to how he uses his skates to express himself. His videos incorporate very unusual and extremely difficult cessslides into and out of tricks, uncommon Eugen-inspired grabbed grinds and a keen eye for abnormal skate spot selections. Aside from his mind boggling skating skills, Atis is a multi talented artist that doesn’t limit himself to just one form of expression, he is also an accomplished musician and a lecturer of photography by day. We are proud to be able to showcase Atis’ work to you in what we hope is the first of many profiles.

Thanks for taking the time to talk with us, Atis. To start with, can you tell us how long you have been skating and give us a little insight into what drew you to rollerblading initially?

Thank you so much for the opportunity!  When I was about five or six years old, I tried out my older sister’s Barbie quad skates and thought it was fun.  Shortly after, my parents got me a pair of recreational inline skates and I skated those in California, where I was born, and Hawai‘i where I moved in 96′.  Around 98′ was the first time I saw aggressive inline, from a guy who lived in the same neighborhood as me. He was frontsiding a guard rail laid on the ground.  That looked so fun I pretty much annoyed this 15 year old dude to teach me how to do that.  Thank you, Rob, for putting up with me, haha.  So at the time, I was frontsiding little curbs and guardrails with rec skates without middle wheels.  I have been skating nonstop since then, which makes about 21 years so far.

You are currently living in the beautiful city of Honolulu, Hawaii and there seems to be a very solid crew of bladers there. Do you think your community is tight knit out of necessity because you all live in such a remote area?

Yes, definitely out of necessity, for myself at least.  It’s just more fun to skate with others.  At a point in my skating, around 2002, I had a hard time finding people to skate with; I lived on a military base and all of my skating buddies moved. I gotta give my thanks to Akari Ihara for connecting me with all the other local skaters, picking me up for sessions, and being an awesome buddy!

What are the biggest adversities to living there?

Cost of living, hands down. Hawai‘i is one of the most pricey places to live in America.

Your skating style is very unique and you approach your tricks and obstacles in an uncommon way. Where do you draw your inspiration from? Is it from other skaters or are you making a conscience effort to differentiate yourself?

I think my style really took off when I was in graduate school for art.  Learning about how art operates made me implement that towards my skating.  Trick vocabulary, style, and obstacles are essentially what I am thinking about when I go skate, and how do those factors play into a trick. This is when I started my Instagram series “If You Can’t Dance, Rollerblade,” where I document new ideas for tricks.  Also, it’s about fun.  I love watching other skaters have fun; people like the Mushroom Blading guys, Danny Beer, Ricardo Lino, Ilya Savosin, etc.  I try not to be too serious when I skate, it becomes not fun.

Your particular skating style probably took some time to perfect. What has been your worst injury that you have sustained over the years?

No broken bones, but one injury that had me not able to skate for a month or two was an MCL tear a couple years back.  I also had an annoying recurring condition called AIS (Anterolateral Impingement Syndrome), where bending my ankle forward would cause sharp pain.  I am currently recovering from a hyperextended elbow and a TFCC tear on my right arm.

Aside from skating, you are an incredible drummer for the band, YUH. How long have you been making music together and can you describe your band’s musical style?

We’ve been making music together for a little over a year, but it feels a lot less because we are all very busy (so it feels like 6 months).  We are primarily a grindcore band, which is a style of music that is generally known for being fast, loud, and short songs. However, we have been implementing different styles (fusion, noise, etc.) to make something not so stereo-typically grindcore. This is the first band where I am the one giving direction so it’s pretty interesting.  I pretty much create drum parts or ideas and see what everyone else can add to it.  We all have similar taste so it has been going well so far.

On top of being an accomplished musician and skater, you are also a very talented photographer and professor of photography by day. How did you get started into taking photos and how did it lead you to your current profession?

Towards the end of high school, I was set to pursue a degree in illustration in college. That all changed when my friend Mason gave me my first film SLR. I was immediately hooked. Looking through old Daily Breads, I learned how to photograph skating, and later I would start to photograph my friends the Manana Rats. We were not necessarily a skate crew, but a group of people that always hung out at the skate park in Pearl City.  I pretty much documented the Rats, through all the good and bad times.  This got me serious about my photography and went to the University of Hawai‘i for a degree in art.  After I got my degree, I developed a love for the academic setting, so I pursued my masters at the same university.

Do you have any blading projects that you are currently working on or trips lined up for the coming year?

I am keeping my series “If You Can’t Dance, Rollerblade” going strong, so expect more trick ideas in the future.  As for trips, I really want to go back to Japan to skate. I went to Tokyo twice within one year, and met some awesome people; the likes of Yuto Suzuki, Hyu Okamoto, Kazu Mori, Kawai Hideki, Tat Miyamoto, Shintaro Nakayama, Ichi, Ryoma Narisawa, Yuto Akiyama, the list can go on.  I am currently re-studying Japanese to prepare myself when I head back.  Also, I am currently considering visiting my home-state of California to skate.

It has been a pleasure speaking with you, Atis. Do you have anyone you would like to thank for supporting you and your skating?

Thank you! I would like to thank: Kevin for reaching out to me to make this article happen. My Mom and Dad for supporting me, my sister for letting me use her Barbie skates, my supportive girlfriend Divine (@hidivine), Rob for teaching me the ropes of aggressive skating (@agita_san), Akari (@thelightray), Ric (@reekt), Robert (@genericbrown), Bronson (@ib_rollin), -the OG Hawai‘i skaters who pushed me, Adam (@_rego) for helping me through some tough times, Jordan Thumper Nagasako (@jordan_thumper) for giving me my first section on DVD, Gaye (@gaye_chan) for supporting my art and career, the Aloha Blade Crew (@alohabladecrew) & The Manana Rats (#mananarats).

Check out Atis’ best of compilation of his entertaining video series “If You Can’t Dance, Rollerblade. Parts 1-100”.