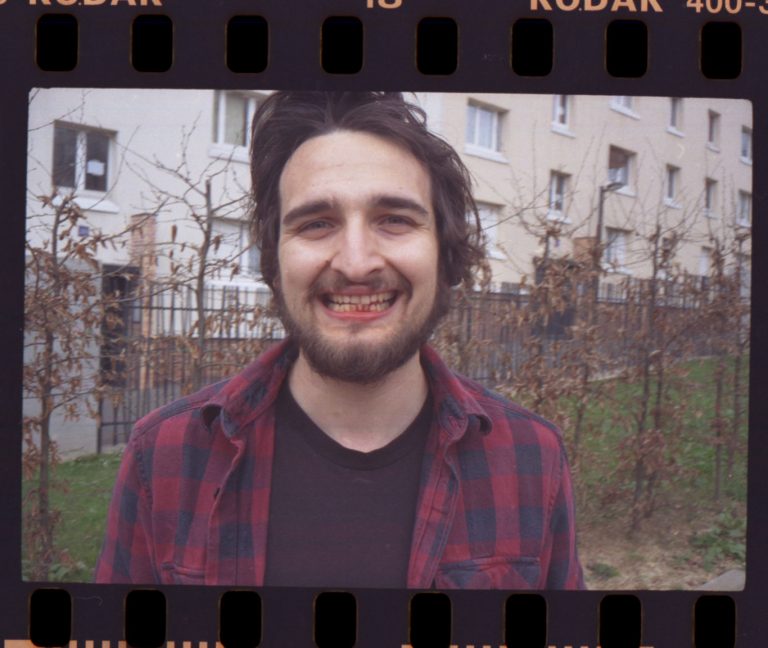 Stan. He is my favorite Russian. I say that because he is from Ukraine and he hates them commies 🙂
We met in Paris and hit it off straight away. He was eager to skate in front of my lens and was down to explore parts of the city people normaly did not went. At one session he broke his front tooth and he was a lil bitch about it all day but i still love him. He is one of the hommies i miss living back in Amsterdam again but we luckly see eachother often.
This is just the beginning of Stan i think this boy can skate bigger if he just puts his mind into it. How long did it take you an Cavin to make the section?
We started filming with Cavin around 6-7 months ago. Both Cavin and I, we like discover new spots, so we specifically looked for ones that were not skated before, everywhere around France, Holland and Germany. And then Cavin moved from Paris to Amsterdam, so it tooks us a lot more time than we expected but both of us are very happy with the result.

How do you like working with Razors?
I love working with those guys. They are very supportive, always keep up on what’s new and my plans. Those guys are a huge inspiration for me, sessions with them are always the best.

Did you already get to try new skates?
So far only seen them on photos. Can’t wait to try them out soon. Anyways new stuff from Razors is always fresh and high quality.

Who are the people you skate with the most and how do you feel albout the scene in France?
Wow man, French scene is very rich for talents these days. We skate a lot, film a lot, in Paris, Bordeaux, Montpeillier and across the country. The guys I skate with the most are my bro Tom Thieuleux, Thibault Maillet, Jules Renault, Adrien Clairaz, Xavier Raimbault. We have 2 big projects in progress, there is a lot of enthusiasm, street scene is very active. That inspired me to create La Rue Book project.

Is Paris a special challenge when it comes to skating? I remember Sam Crofts saying the police are not to be joked with?
That’s funny, because Sam Crofts is the guy who can fool around any police or security guy. And yes, the control is more severe these days, after terrorist attacks. 4 days ago, we’ve been controlled while chilling after session. It went that bad to the point where I had to show the footage on my camera to prove we are not planning ay evil around here. Give me a run down of your favourite sections that came out in 2016 and your favourite bladers last year?
Gav Drumm’s part in Vine Street Chapter II was sick, it is both creative and technical. I also loved Anthony Marchione’s skating in the Bacemint video, he has a strong style. I hope to see more from him in 2017.

What are your plans in 2017, are you making a new video with Taryf?
I’ll kick off the year with Univershlag video, that’ve been working on for almost 2 years now with Jules Renault and Thibault Maillet. Hope you will like the vibe, it will represent the Paris scene at its best. I’m also finishing the video for La Rue project, you’ll see some cool stuff from Sam Crofts, Guillaume Le Gentil, Adrien Clairaz, Tom Thieuleux and myself. As for Taryf 7, rumors say it, the team is motivated to make it happen. Anyways, I’ll gladly take part in it, it can be dope.