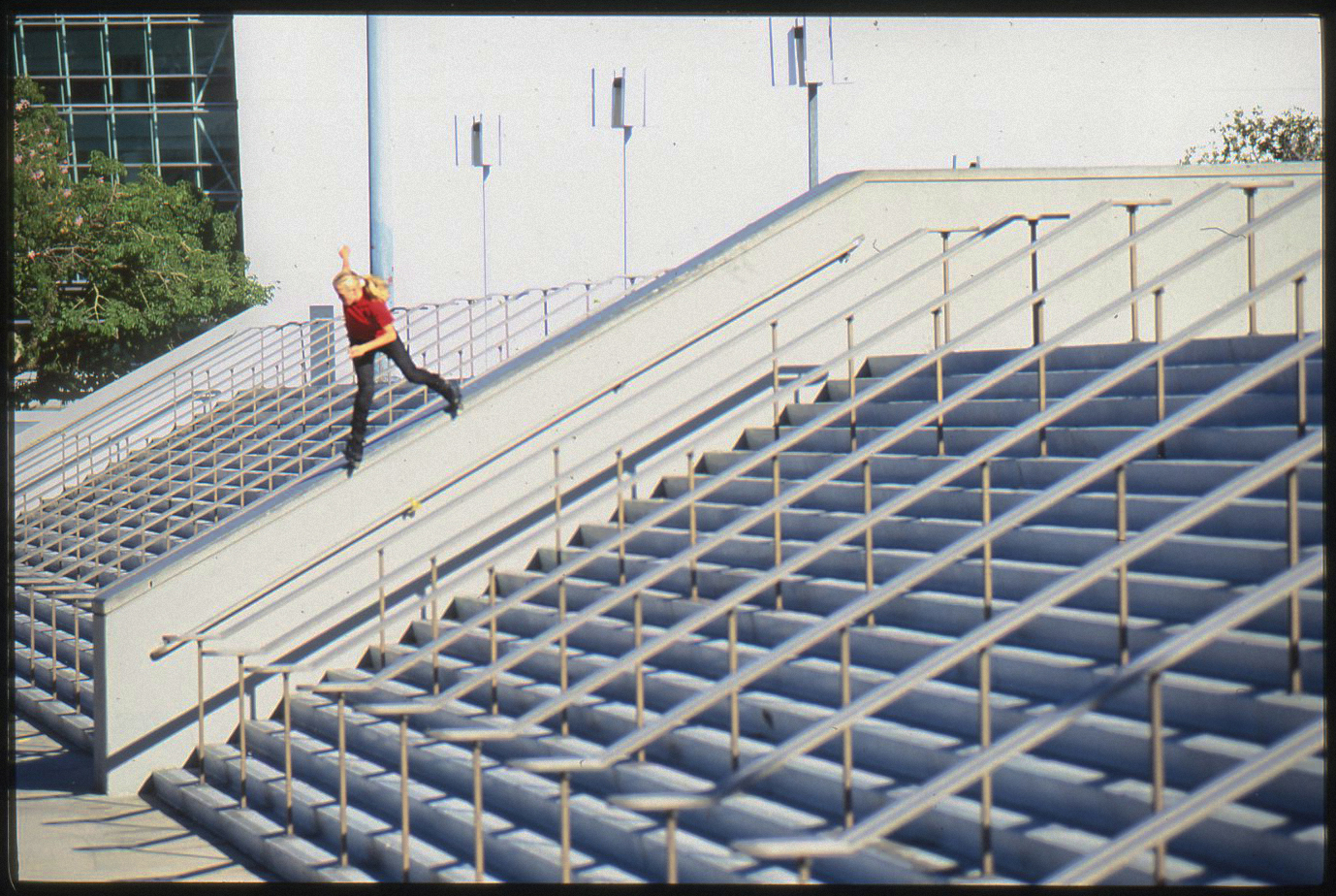 CHASING THE HIGH | FALLON HEFFERNAN VS THE STAPLES LEDGE

LA Photographer Ryan Schude reached out to me with some photo history going back to 2003* when Fallon Heffernan went to skate the infamous Staples Ledge while on the ‘Nobody’s Bitch Tour’ (partially featured in Road To Nowhere). As we come to a close with International Women’s History Month, Ryan suggested it would be a good story to share.

She has an interesting perspective about how we took two trips there and the second time slept in a car to get to it at dawn so she could make her flight…She also grabbed a quick shot of me doing it as a means of hyping her up.

When I reached out to Fallon about recollecting that moment in time, she happened to be in LA while filming for a wheel-related project. It’s worth reflecting on how long Fallon has been rollerblading (and good at it). There were far fewer bladies when she started, let alone sponsored/pro bladies 19 years ago when this photo was shot. There are many girls and women visible today thanks to social media, yet it’s easy to forget documented moments like this that few got to see during the analogue to digital transition of the 2000s.

I’ll hand it over to Fallon to talk about her success at Staples.

Oh shit. Staples. I wanted to do it before ever seeing it in person. I thought it was feasible for me to a back royale it since Haffey full cab back sav’d it. When I walked up to it for the first time on day 3 of the Nobody’s Bitch Tour, I had the realization that at 4’11” and 90 nothing pounds, the only way to do it was to go as fast as I could and hope for the best.

I laced the grind every time and kept falling while rolling away. There were skateboard kids rooting me on and I got so frustrated. I didn’t wanna keep the other girls waiting and eventually gave up with a bruised AF ankle.

I couldn’t stop obsessing over it throughout the tour. Here were photos Ryan took that couldn’t be used now. I just wanted to succeed at this. I saw Shannon Rogers’ Makio it in her Life Plus section and thought that I could do it too. I needed to do it.

After the tour ended, everyone flew out but me. I was still there til 9 am flight the next day. Schude suggested I try the ledge again since he could tell it was hanging over me. Without hesitation, I said I’d love to!

We slept in his VW Passat. across from the iHop that was a couple blocks away from Staples. He knew I wanted it bad. I was 17 and I felt like he really knew I needed to get it this. Some of it was age and some of it proving something to myself at that age. There was a lot going on in my private life then too, so this kind of win was a motivator.

We set an early alarm and went inside the iHop for breakfast, got to the spot at 6am. Here I was again — the big, famous Staples ledge that was popping up in videos at that time. It was a status that you had made in to a certain level of skating by doing grinding this ledge. Like I said, I was 17 and about to start my senior year.

I laced up and started making some attempts, the fall on roll away hitting me becasuse I was moving so fast and had so little weight it was tossing me every time. Schude said he’d give it a shot if I photographed him with his camera from the angle he was at. It was rad— just like that he landed a back UFO and I snapped the shutter. It was my turn. This was the motivation I needed to land it myself.

I look back at my life and think, “Holy shit, when I was a 17 year old little girl, I laced the Staples center ledge.” I get to have that forever.

There were some sketchy back UFOs and back royales while attempting making the attempts. It was 7:45 when I finally landed it, but there wasn’t any time to celebrate. Off to LAX immediately to fly back to Florida!

I felt like I did something I really wanted for a long time. It was an awesome accomplishment for me then. Now that I’m older, there’s no way in hell I’d attempt to anything like this without a helmet or at all. It’s still a big accomplishment all these years later.

I knew it was a ledge no one could succeed at doing any trick on successfully without fully committing— labs to the wall. I wanted to know what it was like to try something that takes that much physical and mental commitment to do. I’m grateful Schude talked me into going back and that the shots got to be seen because that was a really proud moment in my life.

*Correction. The a Nobody’s Bitch Tour happened in 2003, not 2006 as per in the original article. Thank you Robbie Pitts for the correct tour date.