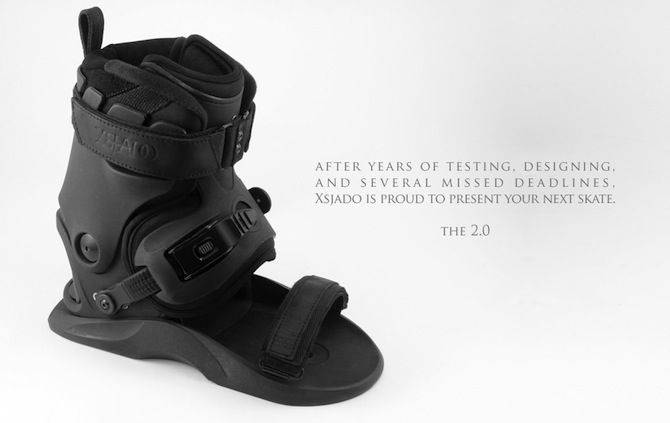 Hi Guys, thanks for taking some time to speak with Be-mag. Number one, this skate has been a long time coming. There’s the old saying, “good things come to those who wait.” That said, how much of a departure is the 2.0 skeleton from the original?

CF – I personally will never blade the first generation ever again. I’m not saying this to sound negative, but all the changes that have happened are for the better. The Xsjado “feel” is still present, so don’t ya worry about that.
SK – The way the soul plate is designed reminds me of a carbon soul, which I really like. Grinds feel no different.
JC – When the first Xsjados came out, everyone was like, “this is weird, and new… but I think I like it’…. I think the exact same thing is going on right now with this new skate. Luckily the skates are reverse compatible with the old ones, so if you like one new feature, but not another, you can mix them until you find you have the perfect Xsjado for you.
JS – Well there are a few major changes to look forward. There is the new slimmer soul plate, which I love because when you look down at your toes it look a lot more streamline. Also a new groove that makes torques a lot easier. The new cuff system that makes the skates feel a whole world different. I urge everyone to try the new skates they feel a lot different then the previous model.

We first saw the teaser at Bittercold 2012 at Modern, what changes were made since that introduction?

JC – We got them to stop spinning, making a lot easier to get them into the boxes.
CF – Essentially the same, a few minor cosmetic and functionality tweaks. Though it wouldn’t be noticeable, I tested a variety of different plastics for each part of the blades. I’m pretty rough on my blades, so I did my best to put them through the ringer so that we’d end up with a quality product.
JS – Yeah, some changes where made since everyone saw what the skate looks like. But it was a lot of technical little stuff.

The detailed images that you released a few months back are great. There are now more options to make the skate fit better for a range of foot sizes. Why did you go with 4 soul plates versus the original 2?

CF – Why not? If there’s the option to have you blades fit perfectly to your foot, wouldn’t you go for it? Since the development of the first generation, there were plenty of people that fell in between the small and the large shells. Now with the 4 sizes of souls, the option is there to ride blades right for you.
JC – Thanks, I took those photos. haha. Yeah a lot of skaters fall into the upper or lower part of the size range on the baseplates. The skaters with the ‘ideal’ size for the baseplates had more control and enjoyed the skates more than other skates simply off of fit/balance. So it was important that we create more sizes, and allow more skaters to have that ideal fit/feel with their Xsjados.
JS – There was a lot of people who rode size 9.5US. It was right on edge of going from size one to size two and the size two 1.0’s are a lot bigger then the size one. Everyone liked the smaller sized skates so we wanted to give them the option to ride something more their size.

How did the Xsjado team decide on a need for a hinged cuff?

CF – There had been issues with the cuffs breaking where they slide in for sizing, so by adding the new cuff it essentially eliminated the pressure that caused the cracking. Besides that, we all thought the cuff needed to a bit of an update and it all worked out for the better.
JC – Yea, I would say the old ones breaking from time to time decided for us, haha. Also, its important to expand options in fit/control so more skaters can enjoy our skates.
JS – It was something that everyone had always thought about so we wanted to see what it would feel like with a hinged cuff. We always loved the Xsjado skate but we just wanted to refine what we already had.

How long did it take to select the right padding and materials for this version?

JC – The padding is recycled panda, it took forever to find.
CF – I’ve been blading them well over a year at this point, if that gives ya an idea.
JS – It took a long time to get everything right with the skates. We all wanted to do as much testing as we could.

When the website was re-launched, you introduced Sean Kelso as the newest member of the Xsjado brethren. How did the transition from USD Carbons to 2.0’s happen?

JC – SK was money in the bank, saw Farm’s whips, and like any blader, wanted to try some.
SK -The Xsjado crew and boss man Matthias kind of thought I would fit better over at Xsjado. It was an easy transition really being that Farm lives right down the street and I’m always talking with JC about stuff. Stockwell and Schwab are my good buds, so I just fit right in. It’s nice though because I feel similarities between the two skates with the soul plate, but it’s nice to have more support and feel like I have more under my feet.

What are your current setups?

SK – Right now I the 2.0s standing on white Create Original frames. I’m still on my pro Street Urethane wheel, 3 down and 1 4×4 anti rocker in the back middle. I have some super fast Conference Swiss bearings that have lasted forever.

JC – 2.0 skelly, an all black sample pair of my pro shoes (like they where were supposed to be, blame China). My Eulogy pro wheels (last years limited edition red) 58mm 3 down, 1 2R Plastik antirocker, Create Original frames and Swiss bearings.

Has the whole team switched to the 2.0’s or have any team riders mixed and matched with the original skeleton?

JS – Right now pretty much the whole team is on the new 2.0s. I have ridden the old cuff with the new soul plate and it was amazing. It was the best of both worlds.
JC – Jeff and Victor did some mixing and matching before they came out, but everyone has been riding the full 2.0 since.
CF – Like I said before, strictly 2.0s for me.

I was lucky enough to be around last year at the Powerhouse when you were filming the Xsjado team video. How is that process coming together? Can we expect a finished video in the near future?

JC – Peep the trailer, March 2013 baby.
JS – The video has been a long time coming and it’s just about to be done with. The process of filming has been a blast. It has been so much fun to skate with everyone on the team. I just feel like the video is going to have a really good team vibe.

*Check out the trailer right here.*

When will the skate and parts be available in white?

JC – when they get here!
CF – Eventually. But until then, you can always swap white parts from the first generation. It’ll be interesting to see all the Frankenstein setups in the future.

Can we expect pro versions of the 2.0 and new footwraps in the near future?

CF – Sure can, JC has been brewing up something for SK and myself.
JC – oh hell yeah, Farm is up first. There’s plenty more in the works though.
SK – I’m currently working on mine with JC…It’s awesome to be able to work on a shoe and a skate. JC is killing it on the design tip. He’s really adding some flavor while keeping it classic and simple at the same time. I’ve seen Farm’s too and some sample Stockwell footwraps; all look amazing. Very excited about the future release of pro model Xsjado product.

Thanks for your time guys!

Did you forget to check out the 2.0 edit from SK and the Farm? Check them out here and here. Make sure to TIP your filmer!

It’s all in the details.