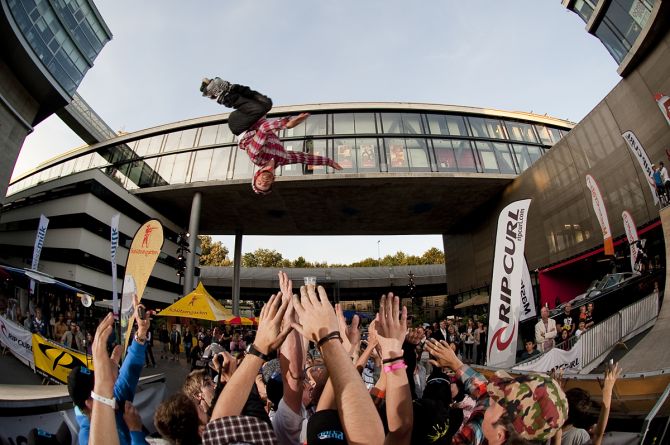 When and how did you come up with the concept for Mind The Gap?

I got the idea for the ramp in 2006. Then in 2007 someone from the Rotterdam government gave me the chance to organize an outdoor contest in the center of the city. We started talking about the project, got some of my friends involved and came up with the idea to do a contest on my ramp. At that time I was already using the ramp for a theater-show called Mind the Gap. I talked to the owner of that show and told him about my plans. I also asked him if I could use Mind the Gap as the name for the contest. He was cool with it so that’s basically how it started.

You’ve been organizing Mind The Gap for five years now. It’s become a fixed value in the contest-circuit. What are you the most proud of yourself?

I’m probably most proud of the team feeling. Everything in general: driving with the trailer, setting up the ramps and breaking everything down again. Just chilling at the events. All this makes it really cool for me. It’s the way we work together to create something nice.

What was the best and what was the worst moment throughout the years?

The worst was definitely Winterclash 2009: I had put my old MTG setup in the park in Sint-Niklaas and then the whole building went up in flames. There was nothing left of the ramps or trailer and I still don’t know if I will get anything back from the insurance company. The best moment was maybe MTG at Breakfest festival. We were staying in a hotel with 20 skaters and celebrated my birthday. Another really cool experience was the trip to Poland. It was a lot of work but when it was a nice feeling when everything worked out.

Getting a bunch of ramps from once location to another seems like a challenge. What are some of the problems you encountered while on the road?

The biggest problems occurred during the last trip to Switzerland. Dick, Jan, Dominic and myself all left at my house at one in the morning. Right before we crossed the border we got a flat tire on the trailer. The roadside assistance got there at 4 o clock. They told us that it looked like the other tire would break pretty soon as well. When the flat tire was fixed the only thing we could do was drive to the closest garage. We slept in the van a bit and just wait until the garage opened. We were really lucky because they ended up having just two of the right tires for my trailer in stock. It was 11 o clock when everything was fixed and we could finally continue our journey to Switzerland. The exact same thing happened when we got back from Poland after 15 hour drive 🙁

Random crowds are usually more impressed by bladers doing big airs and spins rather than technical grinds. What’s your take on this? Do we need to start chucking ourselves of bigger ramps to attract attention?

I think that when you set up a demo or competition in the center of a city the best thing to show are some big airs or spins. That’s what the crowd likes and that’s also what impresses little kids who aren’t skating yet. The way you showcase blading is important. I’m happy we have the MTG rails too. That way we can also show technical stuff. A lot of people are afraid of those rails though 😉

A lot of bladers have competed in Mind The Gap. Which were your favorite contestants?

It was cool to have David Sizemore. It was also his first visit to Europe. Romain Godenaire is always killing it and lately Maxime Genoud has been throwing down as well with his flat 900’s

What’s the absolute craziest trick that’s been done on the ramps so far?

If you could pick any location in the world to set up your ramps, what would it be and why?

What are the plans for this years contests? Anything special coming up?

For now we’ll just continue with what we are doing. I hope we get the chance to visit morecities around Europe.

Randy: For helping me from the start with basically everything and for all his creative ideas. From looking for sponsors to hosting the contests to breaking down the ramps.
Dominic: For always being there, giving a lot of support and for putting up and breaking down the ramps. Dominic and Jan probably are the ones who know best how the ramps need to be built. And of course for all the sick photos he made during all the trips.
Jan, Dick and Timmy: For helping with the rest of the crew, setting up the ramps and for judging the contest events and skating the demos.
Jeroen: For giving me the opportunity to organize the event for the first time in the center of Rotterdam.
Ralf: For helping out during the last 3 years with the designs and stuff.
And of course all the skaters, sponsors, events and cities that supported us during the last 6 years. Thanks!

Check out this edit featuring some of the highlights from all the Mind The Gap-contests: