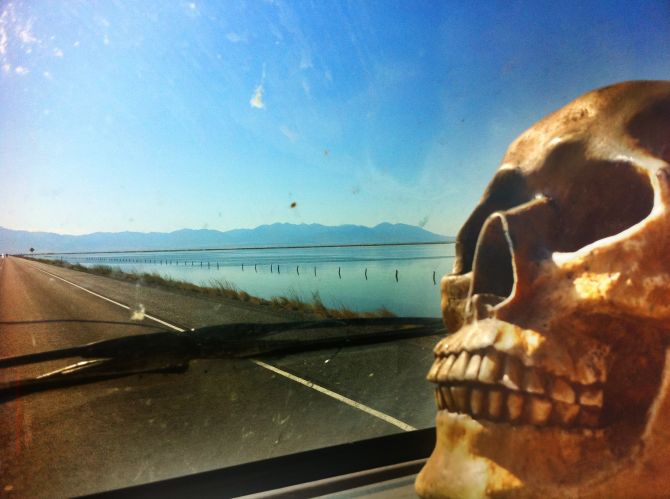 Adam Johnson on CHARG!NG, Piracy and ‘The 20 Project’

You have spent recent months on the road filming for CHARG!NG, one of the most anticipated videos in a long time. You decided to fund this project through a service called Kickstarter and were pioneering this way for blade videos. How did that work out?

It worked out fantastic. We had a lot of people who wanted to support the project and rollerblading in general. They understand that sometimes crazy expenses come up and that we were spending the money for the good of the tour. It’s not like we bought a bunch of hookers and whiskey. This time around for ‘The 20 Project’ the response hasn’t been as good as we would like though unfortunately. This hopefully won’t compromise our ability to travel as far as we want to find new obstacles to bring into your living room.

How did the community react to CHARG!NG when it was released? Do you consider it a success? What were the points of criticism and do you think the critics understood what you were going for with making CHARG!NG?

I stopped reading the message boards within a week of the video coming out. I can’t handle all the negativity towards myself and my friends. I flat out don’t understand it. If you don’t like something don’t buy it. Why people feel it is their right to take something and put it on the internet because they don’t like it amazes me. When I don’t like things I ignore them for the most part. Aside from the messageboards and the little trolls all the feedback that was sent direct to me was positive. I love the video. The people in the project seemed to be pleased with how it turned out. Overall any time I take my friends across the country and none of us die or go to jail it is a success in my opinion.

Lets discuss the film itself for those who have not yet seen it. Why should someone get it if they have not seen it yet? Could you describe the video in few words so a viewer would know what to expect?

Originally we were going to break the video into two parts and continue filming into February and have the tour video released for holiday. The plan got abandoned though and what we ended up with was a 70 minute tour video. Sean also had been working on his color correction skills and dinking around with the footage we were holding for the second video and making parts. When we decided to not have two separate features we included Sean’s video as a bonus for kids who don’t like a montage style format and were looking for more condensed shredding. What you should expect is some of the best rollerbladers in the world touring America getting radical and having a blast.

Why do you make skate videos in the first place? Where does your drive, motivation and inspiration come from?

I made them in the first place to promote the scene in Kansas City. From there it turned into an excuse to travel. Then it funded Straightjackit and Vibralux. Now it works as a promo for the companies and a way to stack away clips for when we are presented an opportunity to make a run at some sort of main stream exposure. The drive, motivation, and inspiration comes from a love of rollerblading and all the brothers that I get to work with on a daily basis on tour.

What type of costs did you take on in the making of CHARG!NG, both in funding as well as in the experience itself?

Any time you give up your job, lifestyle, home, and piece of mind to head out on a 30,000 mile 8 month adventure with your friends you lose a bunch of your sanity. I would suppose for all the highs we experienced there were just as many bummers. Being broke, spending your last $100 on gas, taking your friends to the hospital, skating until 6am… those are the flip sides of the coin to lacing tricks, cliff jumping, partying and meeting some of the best people in the world.

How does it feel when finding out someone put sections of your video on YouTube or pirates it as a whole while it remains on sale at the shops? What do you feel the mindset of this is? Is it malicious or is the person or people acting with positive intensions?

This was malicious. The intent was to hurt us. Problem is it doesn’t only hurt us but the shops, distributers and people involved in the project. When we don’t make back our investment not only can we not pay out on the project, but it limits our capability to create more projects. I’m not saying we are going to quit making videos anytime soon, but we need to find a way to adapt the revenue stream and the delivery method for videos which isn’t easy.

While you of course lose profits because of this, do you feel the online world has aided in spreading skating? Or, do you believe it has been harmful to the video market?

I don’t like 80% of the content put on the internet that portrays rollerblading, but that’s just me. Also I think it creates a weird dysfunctional system where some sponsors start to question the “visibility” of a skater. That’s fucking bullshit. Never did you have Aaron Feinberg’s or Dustin Latimer’s visibility questioned. They would take 2 years to put out secret parts for Mindgame and these sections remain some of the most celebrated to date. I don’t expect anyone who rides for me at the professional level to bang out inferior level parts for the internet. Furthermore, I don’t want to see them put out sections on the internet that belong on DVD/Bluray. I hate to see my peers have to sell themselves short and their legacy on some youtube hit count. As for CHARG!NG being pirated I’ve had several emails congratulating us on the project who would have never seen it otherwise. Catch 22.

Do you feel like there’s a difference between pirating a Hollywood blockbuster or a blade flick? Both involve the theft of intellectual property, correct?

No. I will say this though. If Hollywood was a tight group of your peers on the brink of being shoved further into the back of the closet, why would you steal from the people trying to make it move forward? Stealing is stealing. We steal music, but you in turn go and rock those jams and get turned on to artists, etc. If you want to steal our video, then fine. But I hope it inspires you to support the brands associated with it.

You recently got a new van and started touring again. Could you fill us in on the concept of this new project, please? Who’s on board with you this time and when do you plan to release the video? What do you do to keep people informed on the current status? Did you set up a Kickstarter again?

It just started up. We spent the summer in California avoiding the heat and stacking clips. We do have a Kickstarter for this as well. The concept was to have 20 skaters, 20 tricks. This was stifling for the skaters though, so now we will just be focusing on the 20 skaters and filming their best stuff. If you get over 20 tricks you will have a part, but instead of a number dictating the amount of clips, we will have a level of difficulty. Things not meeting that level will be put out in promotional edits.

Will the film be available on iTunes this time? Is this a possibility or not? Wouldn’t it eliminate a lot of problems with the way Apple has protected their files against piracy and also allow for a much more affordable price for the customer?

Problem with iTunes is not only our profit margin, but the effective cutting out of shops. Furthermore all it takes is one kid with a physical DVD to pirate the copy. iTunes is more of a vanity deal. I love that JJ and Valo got on there to expose rollerblading to the world, but the type of video we are aiming to make wouldn’t appeal to people who don’t skate. We are working on an online content delivery system that isn’t iTunes for the people who need instant gratification, but don’t expect us to jump through all the licensing hoops needed to get this flick on iTunes. However, I do plan on making an extended documentary at some point about the exploits of traveling the road as rollerbladers that is geared specifically for people who don’t skate. This footage base will largely come from CHARG!NG, ‘The 20 Project’ and my upcoming plans through 2013.

Have skate videos gotten too expensive at a time where everyone downloads their movies on demand for a couple of dollars from the cloud? Shouldn’t a niche market like ours have figured it out years ago that distributing videos digitally would keep costs down? What are the benefits and drawbacks to this?

Distributing DVD’s digitally wouldn’t cut down on costs. Not driving all over America and making a video in my home town would cut down costs. $16,000 on gas, maintenance, flights, etc. is the bulk cost of production. $2,500 for some DVD’s is hardly an issue. A niche market like ours should have realized years ago that stealing from the people busting their asses in the streets is going to make things break down within the industry. We were wondering a few weeks ago when people stopped paying dues and started feeling entitled to free everything because they could do a 450° royale.

What are some inspirational words you can leave us off with for those working on everything from large scale films all the way down to the kid in his parents basement planning to make his first edit?

Just skate and have fun. When people make fun of you on the boards or talk shit on your edit or style use that as fuel to move forward. Also remember that it is everyone’s job to cultivate the younger generation and spread love for rollerblading. If you have hate just shut your mouth and go skate. Give me a reason to value your opinion. End of the day if skating doesn’t make you happy and all you have left to do is hate then do us all a favor and give your skates to someone else at your local park.

Thanks for the interview, Adam! Good luck on your tours!

Make sure to check the Kickstarter site of ‘The 20 Peoject’ over here as there are several updates planned throughout the next few weeks! Keep an eye on the Vibralux website for updates on the tour here, too!

Also make sure to get your hands on CHARG!NG if you haven’t seen it already. You can get it at the Be-Mag online shop here.