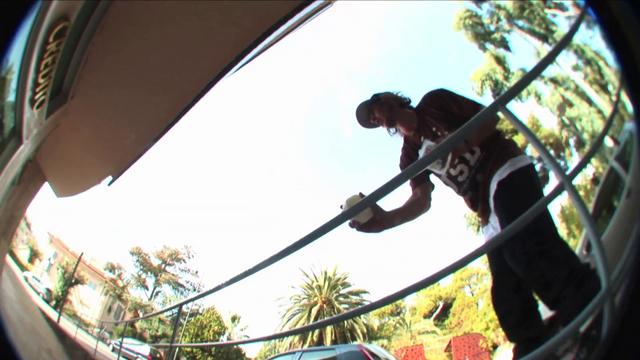 We went to two different places: First one was Sestri Levante, a lil town with a good skatepark and a few street spots. Second one was Genova cause we knew at least a good rail and a mini ramp combo there. I choosed all my spots in Sestri Levante, the first one is in the old skatepark area, we went there a few times, there were some good contests there back in the days. The second was in the new area they made with this big jump box that I never skated before. It was fun. Finally the last spot was so random: We went to a small town to sleep close to Sestri. When we arrived on the first day and when I was looking for a spot to sleep outside (we found a synthetic soccer field) I saw this rail and decided to skate it the day after.

Name: Adrien Anne
Age: 27
Hometown: Fréjus, France
Sponsors: Grindhouse, Usd, Stygma,UC wheels, New Era, Kizer
Favorite skate event: Bulle (High in the park)
Bad Habit: To stay up late and wake up late
Three characteristic features that describes you the best: Cunning, coper, fastidious
Current set-up: Throne Classic Prell with an all white kizer type M, UC Demetrios wheels, powerslide rustproof bearings and Sifika oneill liners
Best rolling edit you have seen in 2010 so far: I’d say Aragon’s section in Game Theory
Good advice you’ve been given: Who tries nothing has nothing
Dumbest thing you did in your life so far: Going out with sluts
Best thing you did in your life so far: Travel and meet new people
A place you really want to travel to next: Japan
Reasons to smile: I am able to skate
One thing you would spend one million euro for: My life
One Amateur who should be pro: With no hesitation: Piotrek Combrzynski