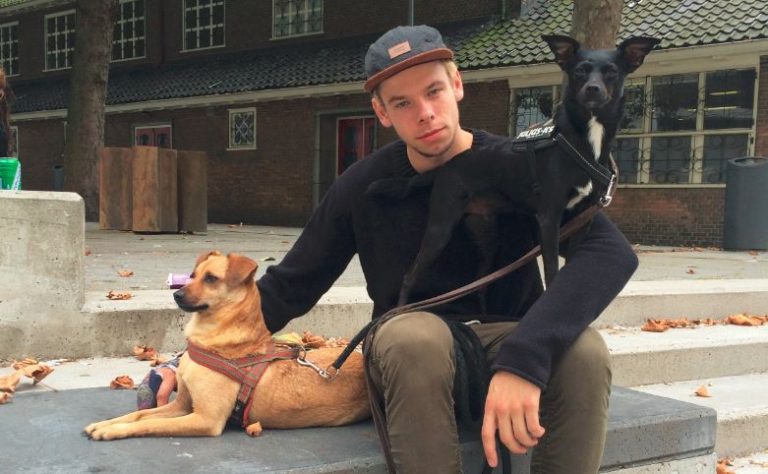 Sem Croft is one of the trio of Adapt’s golden children, nicely behaved Dutch teens that represent the future of Holland’s street skating. The worst one of them is actually their mean uncle Cavin Le Macon, the man that has been working on the Adapt video for the past few years. However, I’m not quite sure Cavin is doing his job about teaching the kids about real life. You see, as it turns out, young Sem didn’t know who Henry Rollins is. He does know about street skating, luckily, so we had something to talk about. How do you think growing up as a member of the adapt team has shaped your skating?
I think It became more mature over the years, because with all the input I got from Pieter during competitions and with Cavin during street skating I definitely learned a lot and that really helped me become a better skater.

For a young skater that has advanced so much in the past few years, how did you get so good at skating street?
I won’t call it good but over the last 2 years it feels like i made a lot op progression. Mainly because of the input cavin gave me, and i got the chance to skate with levi, russel and julian who are some sick street skaters I thinks that helped me a lot too.

How did you like going on tour with the team and Cavin?
When we started filming I didn’t really know cavin as a person but over the last 2 years we became close friends. And touring with the team was awesome, we all got along so well and it made the trips so fun. Was he acting all dad like, as he’s older than the rest of you guys or was he the worst of all you guys?
A: He was a bit of both, there where some times he told us we had to go and stack clips. But most of the times he was the one that was like “yea lets hop the fence and climb that roof to check that spot out”.

What are the top things you learned as a person while filming for the video?
Cavin loves to pet every dog he sees
Golden oreos are the best oreos
Rain in Barcelona sucks

What’s your favorite trick in the vid and why?
A: The 540 gap, I had two heel-bruises the past two years and that gap was my first gap i filmed during filming for my video part. Me and Cavin went on a Barcelona trip to get some final tricks for my part and the day before we left we rolled up to this gap and I told cavin I wanted to do it and hoping my heels where fully healed. I was nervous to send it for the first time but luckily my heels where okay and rolled away first try.

If you had the opportunity to re-do any of the tricks for the video, would you?
No. Do you enjoy the rollerblading lifestyle?
Yes, especially when you get to see new places and meet cool people.

It seems that everybody on the Adapt team is very mature and nice, maybe except Levi who looks like a young and pissed off Henry Rollins?
I didn’t know who Henry Rollins is, and yes.. he does look like a pissed off version of him.

Who do you think should turn pro for Adapt next?
LEVI! The kid is so talented, i had a few sessions with him and he blew my mind every time. Who is your favorite skater on the team?
Rik, dude is a beast. And you would not expect it.

What is your obsession with GOLD but mainly GOLDEN OREOS?
I wouldn’t call it an obsession, more a lifestyle. Pieter started calling me the golden-child because i was winning a lot of competitions in holland at the time and we started making jokes about it and now its a serious thing. You skate a lot of park. Do you enjoy both the same?
There is a little bit of more love for park skating. And after I got the chance to compete at the FISE competitions it only got bigger, it just feels so good when i can go fast and high.

When do you get your scottisch highlander?
Already have two of them, they’re cool. (I have a feeling bee wanted you to ask this)

Thank you Be-mag for the interview it was nice, and thank you Adapt for everything you guys did for me.