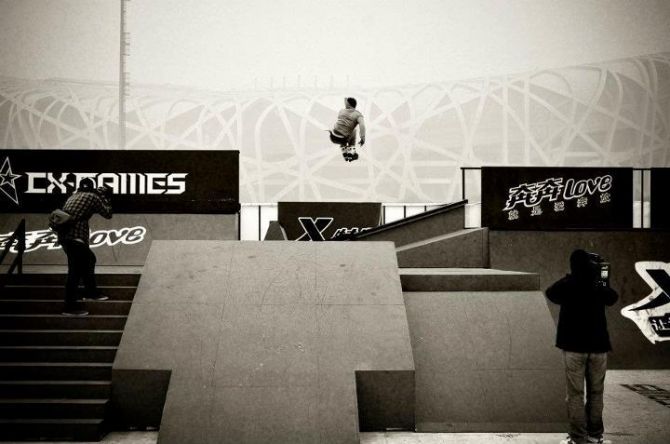 2011 CX games in China. The event was set up right outside of the Birds Nest Stadium where the Olympic games were held. This photo was shot during the best trick contest. (540 Transfer from the quarter on the far right to the quarter on the left)

This is a picture of my Grandfather along with all of my cousins. Obviously we have a very large family. Family is one of the most important things in my life.

I’ve been snowboarding since I was really young. This is a picture of me and my little brother about to shred at Eldora in Colorado, I think I was around 9 years old.

I played football my whole childhood until I got to high school.

I tried almost every sport as a kid and as you can see racing BMX bikes was one of them.

I love my home state of Colorado and feel very blessed to grow up in a place so beautiful. I enjoy hiking in Colorado and this picture was taken at Blue Lake outside of Boulder.

This photo was taken around 2003 in Cincinnati, Ohio at an ASA event. This was my first year on the ASA pro tour and probably one of the first photos I’d taken with skate fans. I still talk to Matt, the kid on the left to this day.

This was my first major contest I’d ever skated in which was the X-games team challenge in Dallas, TX. I’d never been so nervous or skated in front of so many people in my life.

This photo was taken at Eisenbergs Hoedown contest in 2005. I’ve always had such a great time skating with Mike and Brent and that day at the contest we had an amazing session.

Mathias, Murda, and myself on tour in Lyon, France 2007. Two of the most awesome people to travel with!

One of the best contests I’ve ever skated in my life. That day I felt like everything was clicking and it’s a win I’ll never forget.

When I was living in California when we weren’t out skating you could find us hanging out at Moonlight Beach in Encinitas, CA.

Kato, Haffey, Powell and myself on tour in Colombia. We had a great time in South America and the people there showed us so much love. Skating with Dre and Haffey is never a bad thing either!

This photo was taken at a wine vineyard in Argentina. We had been on tour for a week and a half and were in need of a day off. We got invited to tour the vineyard and have great food and wine. The vineyard was situated at the bottom of the Andes Mountains, which provided a beautiful backdrop.

Coco and I hanging out in China in 2011. I absolutely love the Chinese culture and this picture captures some of the beauty that I saw.

This photo was taken in 2011 at the Great Wall of China. It had always been a dream of mine to visit this wonder of the world and it will be something I’ll never forget.

Bittercold 2012. Some of my great friends from the industry as well as some of the people I grew up looking up to!

Jeph Howard, Courtney Cain, and myself. Hanging out watching the last spot of the Mile High Battle. Courtney and I have been skating together since I can remember, one of my best friends in the world as well!