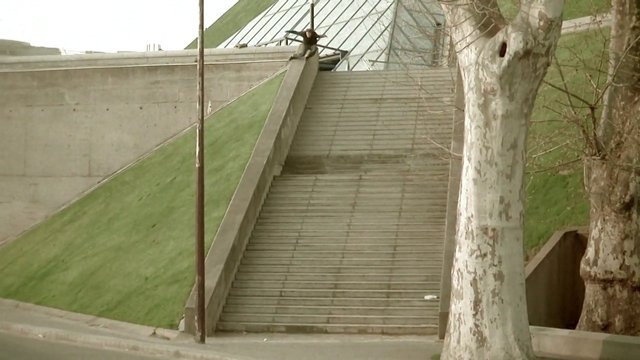 The evening of their arrival was spent chilling and getting to know them better. We realized after about two minutes that we would have a great time with these guys.

As Mat is not usually keen on being filmed, I knew he would make the most out of this rare occasion, and pull some hammers during the week. Some big ones. But I didn’t know when or where.

The first day we went on one of these massive recreational blade gatherings, joining hundreds, if not a thousand people on skates, through the inner city of Paris. This was one of the first times I got to go on one, and it was much more fun than we expected! We fooled around, had a blast and the same day ended up in a park, with a nice roller rink packed with kids. Here we got a few shots of Mat and the scenery.

I had to work the following days, so I could only meet up with the guys in the evening. But time had come for the big tricks, so I joined them on this crazy spot, a massive kinked ledge with a huge drop on the other side. Mat announced his trick, and did it first try. Yup, you gotta get used to that when you hang with this guy. The dude is a machine, I got to join the shoots on a few other spots, as he kept on killing them all week long.

There’s not much to say about the blading, other than the fact that I’ve been lucky to witness this with my own eyes, which is always more impressive than seeing it on video.

What I will remember the most from this week, besides the incredible skating skills of Mat yet again, was the great moments spent chilling with my long time friend, two of the best Danish people I’ve ever met, and a little American girl who followed us around, as she liked seeing guys doing stunts and falling on their asses. Had a blast guys, thanks for the good times!