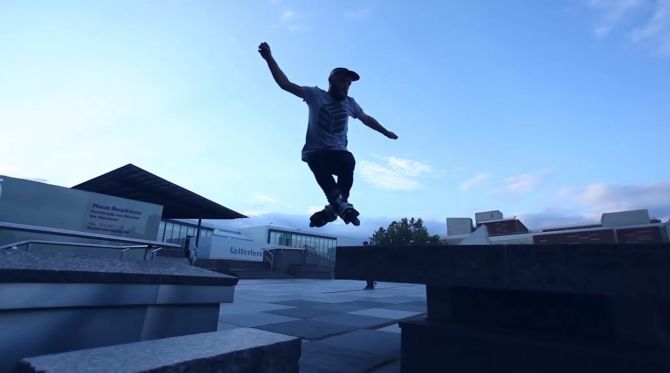 Back in 1992 the industry was mainly run by non-rolling business people. Today, 20 years later, it seems like we are having a completely different situation: The industry is essentially driven by rollerbladers born out of the skating world instead of business men who decide to dive into our scene for a quick buck. People who started blading at a time when Rollerblading was at the height of its powers are keeping the threads together now. The future of Rollerblading lies exactly in the hands of those kinds of people. It’s their commitment and creative potential that will shape the future of Rollerblading. I always try to describe this situation with the following words: Rollerblading is real.

Some of the people I refer to built up new boot companies, wheel companies or even fashion labels from scratch; others organize the world’s biggest rolling contests or release magazines, DVDs etc. Some of them have acquired a high degree of renown within and even outside the industry while others are still under the radar – although they do stuff that is still very important for the sport and its recognition.

Let me take the chance to introduce you to one of the more unknown people who dedicated their life to rolling and also made sacrifices to shape Rollerblading’s future. I am talking about Dirk Oelmann, who started to roll 17 years ago. Wait, you‘ve never heard of the Berlin-based slaphead? Well, you may have worn some of the shirts or shoes he designed already. Dirk Oelmann was responsible for the design of the Vicious Europe Fashion Line, the Europe Ground Control Fashion Line and for the designs of the new Chimera Wheels. A personal project that stood out for him was the 2012 UCON Silhouette Line; the design and styling of which were completely realized by the 30-year old fashion-enthusiast. Although Dirk studied Fashion Design at the University of Applied Science in Trier, Germany and invests so much time in this field, his life is not all about Fashion. Dirk still finds time to work for Hedonskate in Germany and to skate while churning out edits for different media sources like Be-Mag and Modeblock. It is interesting that none of the previously mentioned projects or jobs challenged him personally more than the mission to convince his parents about his sort of lifestyle. Dirk’s parents always wanted him to learn something sensible and useful. His artistic lifestyle is not something they feel comfortable with. However, through this situation Dirk developed a strong will to do his own thing and to always convince his parents about the quality of his work and the path of life he chose. In the end his parents support him on his path.

Dirk’s lifestyle is currently featured in a video that competes in an online film award, entitled WEBCUTS. Check out the video here and if you like it and the things Dirk does, you can help him to win this online video competition.

VOTE directly on the website for the video called „berlin“, produced by Johannes Orthmayr:
http://www.webcuts.org/2012/berlin-award

Important: Likes on Vimeo or Facebook won’t be considered by the judges. You can only vote for Dirk directly on the website.