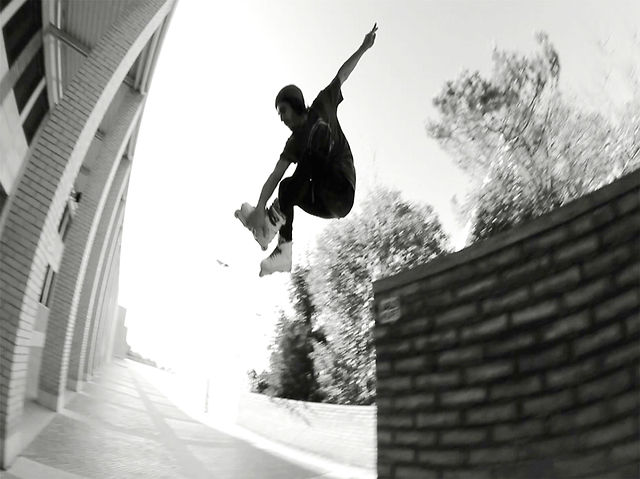 Nicola Fiorenza: One Minute One Spot

Hometown: I live in Jesi, a small town in the middle of Italy. Not so big but it has everything I need. I live with my wife Raffaela and our daughter Giorgia.

Best rolling edit you have seen in 2011 so far: Every edit Ivan Narez does is something I watch at least 3 to 4 times. So I’d say the AB White  Christmas edit. But I also love Brian Binas 90 Seconds edit for Revolution and Wine Gang, too. Dom West’s edits are awesome, too.

Bad habit: Smoking. I quit for a year at a difficult time of my life. The difficulties were the reason it didn’t work out for long. So I started again and I don’t want to quit… at least not at the moment.

Hidden talent you have that no one knows about: I’m performing very well in singing children’s songs

Your mother always said: Since I don’t live with her anymore, she used to say: “Always put your pads and helmet on!” My bad, I only did it very few times!

Skater of the year so far: Bolino? Broskow? I can’t decide…

Favorite food: Chosing a favorite food is very difficult for me since I’m following a healty and strictly diet during the week. I was a little on the “stronger” side when I was a child and that didn’t change until 4 years ago. So from Monday to Friday it’s strictly chicken and any kind of vegetables my grandma cooks for me. On Saturday it’s very simple: spicy pizza and one, large beer.

What’s your biggest weakness: I love blading too much. When I’m enjoying a session I don’t get when it’s time to stop. Sadly I’m not 14 anymore!

Craziest moment in skating: Last year’s tour to Winterclash! Ten friends, hitting Forward Freestyle, Rotterdam and then 3 days at the Clash. We’re going to do it again this year!

Favourite gadget: I don’t know if iPhone can be considered as a gadget, but I love it. Even though when I first got it I thought it was a useless. Best thing is watching blade videos everytime I want! It becomes increasingly difficult for me to watch them on my TV since my daughter Giorgia always wants to watch some animated movies!

Find more ‘One Minute One Spot’ features on Be-Mag here.