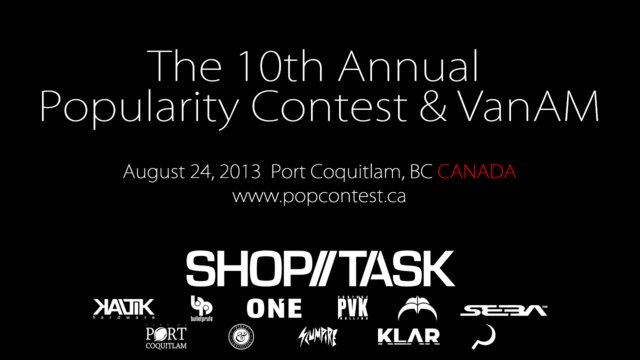 The Popularity Contest 2013 Promo from Travis Nabe on Vimeo.

Be-Mag: Alright Travis! Let’s start with the basics: what, where, when?

The 10th annual Popularty Contest is going to take place on August 24th (this weekend!), 2013 at Railside Skatepark in Port Coquitlam, BC CANADA.
It is the longest running and largest contest in Canada.

BM: So how’s the riderlist? People coming in from all over?

TN: We’re working on generating more coverage and growing the awareness both The Popularity Contest and VanAM events.
This year is looking pretty stacked in terms of Canadian talent as well as a number of riders from the USA’s Pacific Northwest.
It is looking to be solid turnout this year.

BM: Got any hot tips? Who’s the local talent you predict smashing the contest?

TN: This year…hmmm. I am really excited to see Taylor Ritchie and Dallas Kurtz skate the park.
Those guys have been coming out and skating hard for years… but have never been crowned Mr. Popular.
I think it would be awesome to see one of the take the title home.
BM: Have you changed up the park for this year? Any new obstacles?
TN:This year we have Seba sponsoring an obstacle at the event. It is a long flat-down box… and will certainly be one of the bigger features to hit.
We’ve also built a huge modular launch ramp so anyone interested can get their Sven Boekhorst on.
And we’ve got a pretty massive A-frame style disaster box for everyone to hit. I’d put money on that being our best trick feature.
Aside from that, the park has a lot of natural features and an incredible bowl.
Overall, I’m quite excited for the park this year and cannot wait to see what goes down.
BM: Where does the “popularity” theme come from? Is it more than just a name?
TN: I can’t take credit for that bit. Originally, the contest was founded by the Mushroom Blading / How To Be Unpopular guys.
Todd McInerney ran the contest for the first six years and I’m sure the name of the event stemmed from some stroke of genius that he had all those years ago.
If you follow any of their videos and podcasts you know what I mean.
The judging of the contest is actually pretty literal to its name. Contestant voting. If you skated in the event, you get a vote.
Add them up and they skater that receives the most nods from his/her peers is crowned Mr/Mrs. Popular.
BM: Now for some really important questions – what can we expect from the afterparty?
TN: The afterparty is always a riot. In past years we’ve had everything from video premieres to nights in the tank and everything in between.
Once we took over a pub in Kamloops that was hosting a foam party that evening. It may have resulted in us being forcibly removed by the authorities around 4AM.
This year, the afterparty is planned to take place at The Metropole Pub in Vancouver. Anyone of legal drinking age is more than welcome to join in on the festivities.
I’m sure it will be a night that is not soon forgotten.
BM: As for the contest, what past awesome things are there for this year to live up to?
TN: Ha, we’ve got a few. At the inaugural event in 2004, there was some issue with us having the skatepark closed off for the event.
Some of the local skateboarders were not too happy with this and were causing a bit of a disturbance.
All of that was put to rest when Ben Weis charged across the whole park and football tackled of them to the ground at full speed.
Not at all. A few years after, we saw Dustin Werbeski win his second Mr. Popular title with a huge disaster 720 Mizou.
Easily one of the gnarliest winning tricks in the last 10 years.
We are incredibly fortunate to have the sponsors that we do for this event. Year in and out, they’ve helped us to grow this event into what it is today.
This year Mr. Popular will be taking home $500 cash, a one of a kind trophy and a bunch of other swag.
BM: Sick, so it’s winner takes all?
Naw, we’ve got additional prizes for the top 3 in both the VanAM and The Pop Contest. Plus a Bulletprufe Denim sponsored Worst Slam award,
the Kenny Tico Best Trick Award and a couple other joke awards to keep things interesting.
We wouldn’t be able to pull the event off without the continued support of companies that believe in the event. A big thank you to Bulletprufe,
Cariboo Brewing, First and Lexington, Ground Control, ONE, Provoke Rolling, Razors, Scumpire, Seba and of course, Shop-Task.