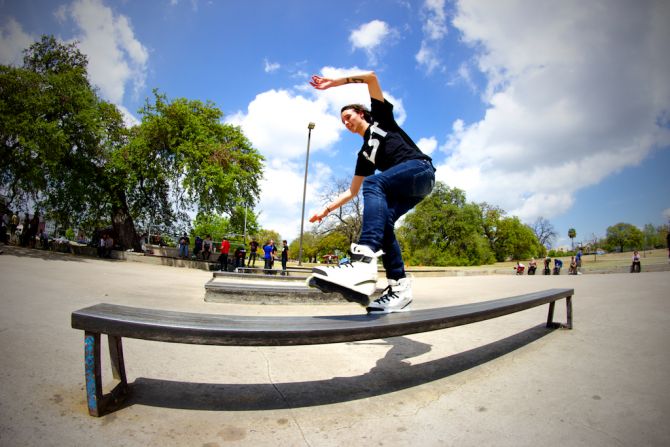 After warming up at San Pedro we headed to Breckenridge High School, the home of the most beautiful straight ledges off stairs you have ever seen. From the start home towners Dylan Cobb and Ian Freunscht showed their familiarity with the spot and proceeded to destroy the ledges like only they can. The man with a million names, Logan Alexander “Dench” Harlan, scoped out the nastiest ledge at Breckenridge and pulled a royale to 180 off the 11 foot drop side. Jarrod Banning also skated extremely well, coming through with a very nice back torque to true top porn on the stair ledge.

For the second spot we headed to a fun but also sketchy bank to long handicap rail. This rail is a perfect example of a spot that looks great in video but is much harder to skate in real life. We all know this feeling. This didn’t stop Travis Reynolds from putting on a tap dancing clinic on the rails though.  He laced an incredible fishbrain to fastslide back to fish to royale that was very reminiscent of Mr Jason Howard. Kudos to you Travis! The best trick here though went to the man himself, Anthony Medina. Ant landed the best christ fishbrain I think I have ever seen in my life. It was a crowd pleaser for sure.

Now the last spot was something different entirely. It was a stupidly high kinked rail that needed a kicker ramp to get on top of.(Unless you are Aaron Malatek) The rail went into a nice ditch and then kinked back up at the top.Taking the whole rail was an accomplishment even if there was no landing at the very end. This is where the things started to get really out of control.

Dylan earned first place that day and went home with a nice wad of cash in his pocket. Jarrod Banning won a deserved second place and wild man Travis Reynolds took third place. It was an incredible day that happened so fast I was sad to see it end. Much respect is due to TSS organizer William Kennedy for holding down Texas and giving us all a reason to come together as a family every few months.The Texas scene has never been stronger or more united than it is right now. If you are not from here do yourself a favor and make your way due south and we will show you a little southern hospitality. You better bring some beer and some sun block though! You are going to need it!