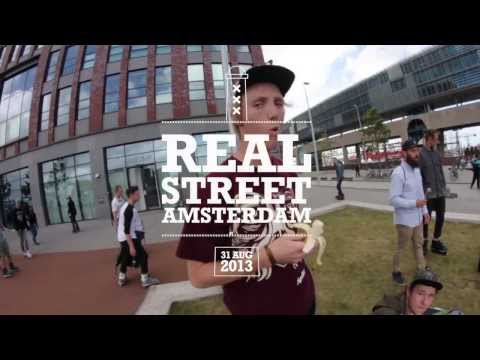 Real Street Amsterdam 2013 – Back in the game

The riders started out on the short side of the rail, but after Jacob Juul and several other riders figured out that the long side of the rail was also skateable (although you had to jump over a bit of sidewalk) the session quickly shifted to the long flatrail. While Rik van Huik, Sam Crofts and Jacob Juul started out with some stylish long grinds, the Germans started taking over the show with quick and tech switch-ups. Jo Zenk finished of the spot with a transfer from the rail to the curb, and the group moved on to the third spot of the day.

The third spot is one of the infamous Amsterdam rails, known for being steep and having hardly any landing: go to fast and you’ll end up in the water. Everyone was enthousiastic and Pascal Tan was the first to skate the rail with a stylish soul to topsoul, and later on a huge Kindgrind. More and more people joined in on the session and the tricks started flowing, the juniors joined in and got a huge ovation from the crowd. Unfortunately Jo Zenk injured his ankle, but not before he landed a sick halfcab topsoul.

Before long the judges had seen enough of the third spot, and everyone followed the big cargobike with speakers to the final spots of the day, a huge kinkrail. The session continued and Rik van Huik, Gino Dangers and Jacob Juul started killing the kink. Rik suprised everyone with a huge soul to topsoul to truetopsoyale, and Jacob Juul absolutely crushed the rail with a 360 royale. The real suprise came when Eugen Enin decided to skate the other side of the rail and transferred over to a different rail next to the kink. Shortly afterwards people spotted another kinkrail on the otherside of the road, and the session moved itself to the last spot of the day.

The best moment of the day arrived when Rik van Huik decided to do a huge disaster royale on the last part of the kinkrail, and had so much speed he had to do a jump in to the canal several meters further in the landing. The crowd went wild, and the outcome of the competition was clear to everyone, both Gino Dangers and Rik van Huik both absolutely destroyed the spots, and Rik’s final disaster was so sick that it was impossible not to declare them the winners of the competition.