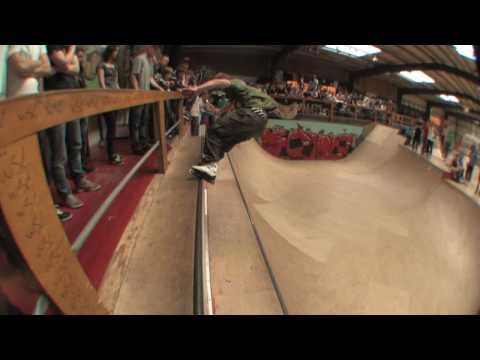 After two prelims in Rotterdam and Eindhoven, the exiting showdown took place in ‘s-Hertogenbosch. In the senior competition two guys – both Rollerblade team riders – Dick Heerkens and Adil Farhouni had the chance of winning the overall competition.

In the junior contest the battle between the first two riders Tasheed Zaalman and Sem Croft was even harder. Both riders obtained the same amount of points in the two prelim rounds. Also in the third round the difference was so small that it was very hard for the judges to decide. In the end Tasheed won the third round which made him the overall winner in the junior competition. Unfortunately Tasheed broke his wrist with his final trick in the third round. Therefore he had to go to the hospital which made it impossible for him to be at the winners announcement. Just a few points behind Tasheed, Sem Croft came in second. The third place was for Tom de Boer. All three riders on the junior podium come from Rotterdam, so a strong scene is building up there.

After the finals a small best trick contest was held, easily won by another guy from Rotterdam, Martin van Drunen.

Overall Oeteldope, the Dutch Championship in Rollerblading, was a great success and will definitely return in 2012. It will be bigger again with more rounds all over the Netherlands. In the meantime the organization will keep motivating the skaters to be part of this growing sport and lifestyle. The next event of Oeteldope will be the Mind the Gap contest at the Hiphop in Duketown event on the 25th of June.