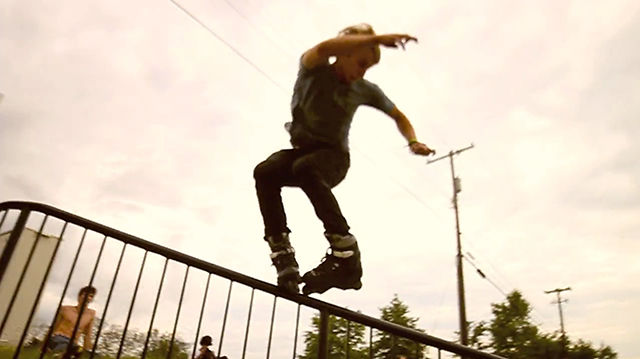 The day of the contest I got off work at noon. I had already been up since 4:30am working at a bakery. I rushed home to get the directions together, which became a failure in itself. Scott built the box, which we never ended up using, anyway. I rushed to Kinko’s to get everything printed and then made my way to the park getting there an hour late. A big thanks goes to Scott and Kramer for that. I arrived for the Park Best Trick portion, that had everyone stuck at the park for an extra hour. Once I got everyone registered we headed to the first spot… which was pad locked shut. Awesome!  So, we headed to an alternate first spot. Once we got everyone there, we got started.

Early on the stand out were Mark Wojda, Daniel Powell, Garret Mitschelen, Carson Starnes, Kyle Smith and Michael Braud. Michael didn’t sign up until halfway through the spot, which was alright though. I have a pretty laid back approach to this if you have been reading thus far. The Police came and everyone began heading to their automobiles. The officer stopped some of the guys, and told them, “Everything is fine. Just watch for cars.” How cool is that? With the situation under control I decided to extend the spot for fifteen more minutes, during which Carson laid the hammer that included running through the grass, rolling a four foot slab, and disastering six feet out to the rail. Which, may I add, had two white posts sticking up 3 ft up on either side. After, we proceed to spot number two. It was a school with all kinds of nutty obstacles. One of them being a drop flat rail that curved around to almost a semi-circle. There also was an electrical shed about five feet out from the rail. All this stood at about eight or nine feet up. I highly suggest you watch the edit, because I don’t want to ruin it for you. After the Police came and spoke to me about what was going on with the contest we decided to head over to the third spot.

We made this part a total of fifteen minutes before a security guard showed up. The funny part is that even with him being too scared to get out of his car (don’t ask why) he somehow coaxed us into leaving. By this point I realized it was already seven in the evening so we headed out to the last spot: Buster’s Billiards and Barrom, the most important spot of all, where the after-party was held. There, was a loading dock along with some boxes we set up along with a newly built bridge that included an array of different pieces to stunt off of. Believe me when I say that there is a very exciting reason that I am not naming tricks from the contest. The skating will do all of the talking needed to clearly show the mind-blowing reality that went on. Why? Because, that’s what the KY Battle is all about!