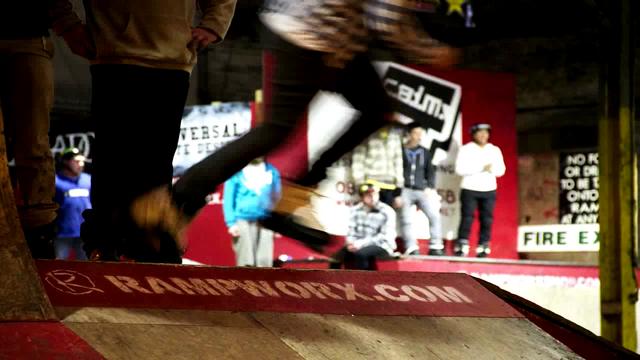 Not long after we arrived things had already started going off. A group of lads were destroying the step up with some huge spins and someone next to me yelled, “You know when the French kids are in town!”

The opening heats started off with a bang. Joe Atkinson came in hard and launched off a quarter to fakie wall stall, 270 transfer to another. Alex Burston fudged his opening trick, but quickly recovered by killing the rhythm section with a cork 540 followed by a fakie 540 and then, a perfect fakie 720 over the spine. This second opening was the start to one of the most consistent performances of the day.

Jeremy Suarez left commentator flabbergasted with a very creative darkside true kindgrind on the box, while Elliot Stevens managed a stylish backside backslide to fishbrain on the rainbow. Right at the end of his heat he threw a fakie 540 disaster top soul.

The finals were a hectic affair and it was impossible to keep up with the stunts that were happening in every corner of the park. So, while I cannot claim this to be an accurate representation of everything that happened I will relay what stuck out the most for me.

Nils Jansons continued his rise with a nifty 540 darkside alley-oup soul on the box. Meanwhile, Elliot Stevens continued to impress with a 540 transfer from a kicker into the spine section. Elliot Stevens would later on have the nastiest bail of the day when he went flying backwards off the rainbow and landing hard. The crowd held their breath for him and people crowded around to make sure he was okay. I don’t think I was the only one disappointed by his run being cut short. But, luckily he managed to make it off of the park on his own.

I am ashamed to admit that in the manic atmosphere of the final heat I missed much of Alex Burston’s run. Only later when I looked back over the videos I had filmed did I see the judge’s logic. While most battled it out in the area around the funbox, he can be seen in the background; seemingly more comfortable in the air than on the ground. Huge 1080’s, fakie 1080’s and any number of ridiculous corkscrews, one after another, rightly earning him top place.

While the best trick competition may not have lived up to expectations, there was plenty to mention. Joe Atkinson repeatedly attempted a disaster topsoul, which saw him acid drop a tiny quarter, get air off a tiny kicker, gap a mammoth distance and land hard on a rail. He kept getting up after so many hard falls. I actually started to suspect he was a terminator. His persistence built so much tension that when he finally landed it the crowd was elated, proving he is one of the toughest skaters in the UK.

I may not have done every competitor justice, but I have recollected that day to the best of my memory. To put it simply, the ecstatic nature of the day made it impossible to follow all the antics of such evenly matched athletes.