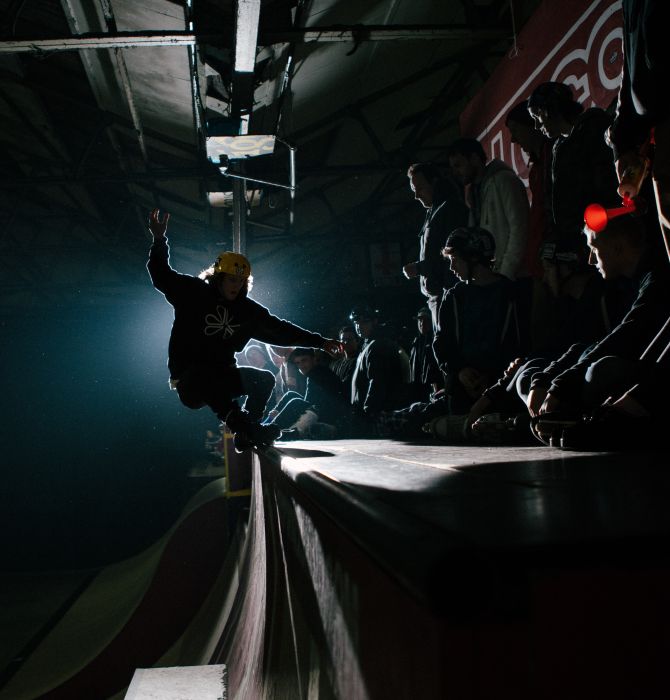 I see that Jordan Maders has worked his dick off and put out a banging edit before I even managed to write a few words down, so you already know a lot of the sick things that went on, but there’s so much to mention. Like the youngbloods contest, or lack of it. This seemed like a weird decision since we’re all so intense about supporting the youth (how else do you explain colour technology?)

That might have put a bunch of kids off entering the free-for-all AM contest. But the young guns who did enter held up well, especially Kai Evans from Wales (look out for him!) and hopefully that gets more little fish to jump into the big pond in future.

The pro contest held a few surprises, not so much in the skating, which was enough to blow your face off from a hundred yards, but even more so in the skaters themselves. Team Seba was out in force with Leo, CJ, Pierre and Anthony getting everyone psyched about the new skate without even showing anyone what it looks like. Team France and the Valo guys were both notably absent, which I guess deprives the internet of two of their pet hates and leaves UK trolls wondering “can we still hate on spin-to-win when one of our lads does it?”

The Xsjado 2.0 was everywhere like an invading army, noticably on Elliot Stevens’ feet while he destroyed the kink handrail like he hadn’t even noticed the switch. The Aragon 5 had it’s debut as well, causing a lot of excited pant-wetting among the razorheads at the park, but no sign of the man himself. It was left to Quinny to rock the skate into 3rd with vicious speed and style. Swain was on fire, with some kind of cheat code allowing him to pause mid-misty, do an extra 360 and then carry on like nothing happened. Lomax carried on his winning streak, acting like insane switchups on only one obstacle at a time are for losers, and all tricks must be boosted to flat to count.

Jack Swindells was the UK star of the show, his habit of using soul grind as a launch ramp into 540 kindgrind and other madness took him best trick as well as the AM second place, but Ricketts was more consistent in the end, throwing together creative lines full of battle-hammers back to back.Thanks to all the bladers that shredded harder than I’ve seen for a long time, to Rampworx for hosting a killer event, and to Matt D for coming up with the whole thing. I don’t know what we’d do without all you guys. I’d tell you about the afterparty, but I really have no idea. Camp Holland and team Liverpool met up, got wasted with everyone else in Aloha’s underground bar, and then it was Superbowl Sunday. Have a cold chicken wing on me, and we’ll see you at the Winterclash!