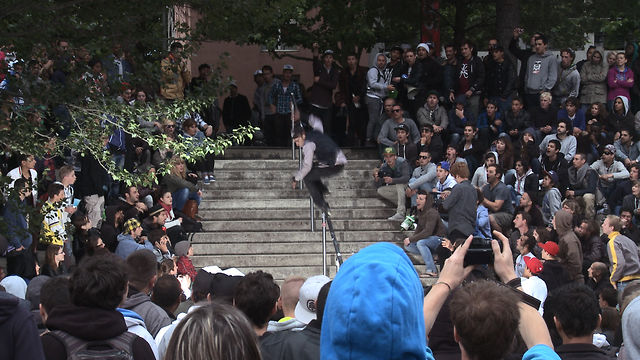 FISE is unlike any contest that I have ever been to. It’s hard to even call it a contest considering the scale of the event. Having attended Bitter Cold Showdown and Winterclash, I can honestly say that FISE, Montpellier had that same energy, but amplified by 1000%. Due to the fact that Rollerblading was going to be featured in its own venue – Roller Slopestyle – I felt that it was necessary to attend this year’s FISE. Not only for the reason that it is the one of the premiere events in Europe, but also because a new contest format was implemented. Granted, this new Slopestyle format is still a young concept, but after speaking with the event coordinator Johan Berthonneau the course will only improve year after year. Being that the BMX course changes each FISE, the roller Slopestyle course will receive all the BMX obstacles from the previous years course making the course larger and more intricate year after year. A lot of people were skeptical about the new contest format, but in my opinion, it is important to have a variety of contests so that the public can see rollerblading in a different light rather than the typical jam contest format which is just as important in my opinion.

For the future, I hope that more people will attend this event and display rollerblading at the level it has risen to. It’s important that rollerbladers make a presence at the FISE and I encourage more international skaters to attend next years event. It is the only way to really push rollerblading out in to the public. The bigger we make it for ourselves, the importance of the event will be much greater towards outside industry people. Fuck that whole nonsense about keeping rollerblading underground. Yes, it is a beautiful thing that blading is operating on its own terms and thriving as a small community. But the time has come that we really try our hardest to bring our sport to a broader audience. Our athletes are just as, if not more impressive, than the other sports at FISE and our exposure starts by making our presence known at larger events and festivals such as FISE. And I don’t mean by running around the course with a gigantic dildo.

Here, Be-Mag comes up with a an exclusive edit about the Rollerblading action at the FISE 2012 putting the sport in a cool light. Share it with your friends, colleagues, family, with your doctor or whoever.