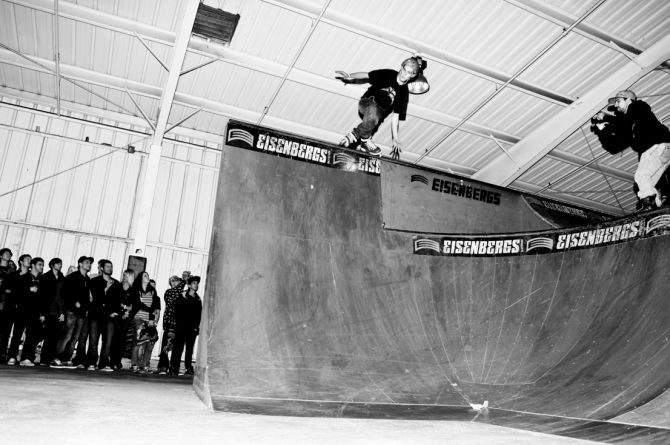 BMo’s the City Never Sleeps premiered Friday night to get the weekend rolling. The video starts off strong and keeps going with full sections from Fritz Peitzner, Josh Glowicki, Brady Johnston, John Sullivan, Demetrios George and Keaton Newsom and will be out for the holidays. The premiere was the start of the large group chants and overall fun that happened all weekend. Things become a bit unclear after the premiere… I do know we went to a bar… I do know shots were being taken, but aside from this, I can not recount the night clear enough to waste your time.

Saturday I woke up to a full apartment. Bodies laid out across the floor like some savage game had been played out and we all lost. But movement began and it was contagious. One by one the bodies arose and cracked open the only fuel that would get us going: Alcohol. Some still moved slower than others, but movement with a large group of bladers is always a good thing. After breakfast and some morning drama, a collective agreed to warm up at the Allen Skatepark before heading to Bergs. I used Allen as an excuse to rehydrate and not skate. I wanted to be in good form for this year’s event. It after all was to be the last! So I decided that I wanted to partake in a Hoedown like I never had before. For thirteen years I’d watched, I’d filmed, but I’d never competed. I’m not a fool! I had no intentions of winning, I just wanted to session with my friends, and that is what makes the Hoedown great! It is and always has been a session. While you skate, the other competitors watch and judge, and this whole act brings the spectators and skaters together with large group chants for one another, dancing to whatever DJ Wreckshop has spinning, cheers and moving group hugs at the end of the contest. It truly is a community unlike any other. I did not advance past my heat, but I had a great time and felt good to have landed anything at all.

The contest moved fast and tricks were quickly being pushed to higher limits. I wasn’t sure who was in the lead until the very end… The rainbow ledge played host to numerous stunts you can see in the edits, the new bridge was used much more than I thought it would, and then it come back down to where it all started: the rail in the dark back corner of Eisenberg’s Skatepark! Even after the park was redesigned the down rail and ledges in the back have always had the respect of street skaters and tricks have happened on these obstacles that had never been attempted before. The crowd moved in and the entire park began chanting for each of the Final 5 as they attempted their tricks down the rail or ledge, or back up to the rainbow. It came down to consistency and a hell of a lot of style, because I don’t recall John Sullivan once even attempting the rainbow box or new bridge, I just recall him lacing tricks and making each of them look good. He made rollerblading look amazing and fun, and for that he deserved this win. It was recognized by his peers and the final results show that rollerbladers enjoy good rollerblading. Congrats John! Thank you everyone, and a very special thanks to the Eisenberg Family (Arlo, Vicky, Josie and Lulu).

Check out our other Hoedown 2011 coverages here.