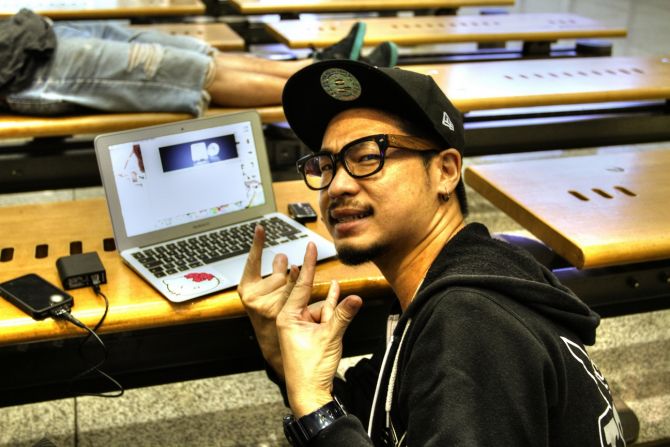 We had only had brief email exchanges and there was the possibility – or not – that someone would pick us up with transportation at the airport and also the possibility – or not – that someone would reimburse us for our last-minute booked plane tickets. We arrived on our red-eye flight at 5 AM… and stupidly we watched in-flight movies and consumed crappy in-flight food and whiskey instead of being good kids and sleeping. This stupidity reared back on us as we came out the exit gate at 4:30 AM with no one to greet us and no one to be found at the prearranged meeting place. Nevertheless we were blessed with speedy airport wi-fi (thanks Korean technology) and an awesomely picturesque Korea sunrise.

At 7:30 AM an austere Korean dude in a suit arrived and, with military sternness (a kinda common mannerism of Koreans), he ticked off our name roll-call style and then told us we would have to pay for a coach or wait for the free coach at 3 PM (umm, no thanks). Apparently though, the Thai team arrived at 10 AM and did decide to wait for the 3PM coach and catch some sleep in the airport.

We finally got some sleep on the coach and after a ride through endless streams of communist-looking concrete buildings we ended up arriving in the middle of nowhere in the small countryside town of Chuncheon. On arrival, again, no one was there to meet us, but we were soon escorted to the park site. The park was set up in a spot surrounded by mountains and had a unique layout that consisted of two big launches in the centre and a bunch of street-like rails, banks and bowl-like obstacles raised up around the edges of the park. The whole thing also had a smooth fresh layering of skatelite material.

We were all pretty much dead due to the lack of sleep and were escorted to our nearby hotel, the Ritz… Motel (not the Carlton). With the organizers of the event having to cut down costs, the hosting hotel venues were basically dimly-lit buildings which lacked natural light with a dog behind the reception counter in one – it was, in essence, a hotel for a place for, you know, er, guys to take girls to. Anyway, at least the rooms were big and we finally got some sleep, with other skaters arriving continuously throughout the rest of the day.

The fact that we were staying in a shady hotel didn’t sweep Chiaki Ito’s interminable smile and all the other skaters looked fresh despite the long journeys. Sven Boekhorst, Eito Yasutoko, Yuto Guto, Worapoj Boonnim, Franky Zhang and more all turned up, and all were put up in the same dubious motels complete with sensual lighting and, yes, baby oil. One of the last to arrive was Brian Aragon, who arrived in the evening after a long-ass haul from America with a delayed stopover in Tokyo (despite having experienced the luxuries of first-class en-route).

Although it’s a Friday night all the skaters are hitting the sack now in preparation for the practice early tomorrow morning (why does rollerblading always get stuck with the early-ass time slots?).