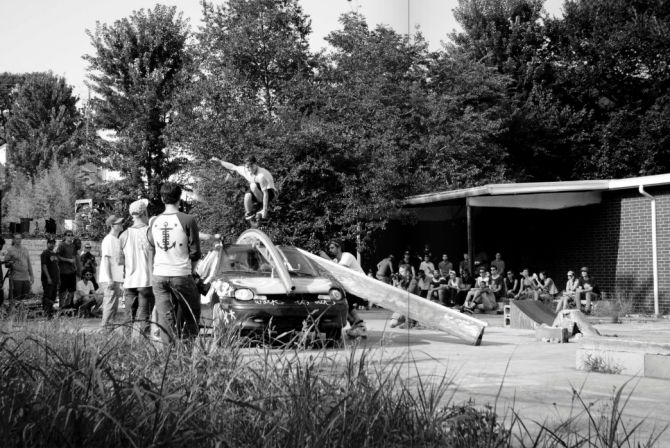 The wild card being an engineless Dodge Neon that we picked up off craigslist for free. I duped AARP into towing it 70 miles into the city. Dustin Hinson painted it ATL and we decked it out with a PVC rainbow rail over the top, a make-shift kicker screwed into the rear bumper and an ancient p-rail protruding from the driver’s side window. It was kickass.

I like to think of the Stomp as a celebration.

It began on Friday night at my friend Tomica’s hair salon. We got nice and buzzed off ice cold PBR’s, sat indian style on the concrete floor and craned our necks to ogle over the new Valo team video. The next day we took the streets.

It always brings me pleasure to roll up with like 100 bladers to the Fourth Ward Skatepark. It’s a free outdoor plaza, where one can typically find about 30 skateboarders, tripping over each other, smoking cigarettes and skipping school. It’s nice to show them our presence in the South. I was even happier when I saw local legends Andy Kruse and Wes Alrdrige out there shredding the bowl. Anyway, we set up booth, collected entry and introduced the skaters to the judges.

Spot 1
A 100 foot granite flat ledge… what could go wrong… well apart from collisions every two minutes and 4 man high pile ups. Tricks were laced, beers were chugged, Troy hit his face on the ground and we continued.

Spot 2
This spot was a diamond in the rough. Really rough. So rough in fact, my girl and I were at this 16 stair drop down ledge at 4 in the morning the day before the event, bricking the bitch. And it proved to be that. A bitch. A steep, scary, grimy, intimidating, painful bitch. I guess when there’s money on the line, people will skate anything. J Bah AO fished it, Philip Moore back fastslid it, Anthony Armstrong laced a fast plant to back sav to forward, a bunch of people got worked, I had a run in with the superintendent of the organization that runs the lot; negotiated a leniency pass, wrapped it up and we were out of there.

Spot 3
The problem with a car with no engine, whether it has a rail on top or not, is that you have to push the damn thing where ever you want to park it. So push we did, got it in the DIY park, pulled the E brake and started putting some last minute screws in it. People started to assemble, we gave some parting words of wisdom and let the games begin. The line for the car started to back up, I mean who wouldn’t want to skate a perfect rainbow rail over a car? People were killing it left and right, Jarrod Banning was skating the thing like a p rail, David Sizemore laced front fast slide switch and reg, Nick Bates did a front roy, transfer TTP on the rusty shot gun rail that was screwed into the roof. Sam Moore tumbled into the front windshield, breaking it, immediately turning a good time into a broken glass danger zone. But the shards of jagged glass sticking out of the frame encouraged everyone to skate the other obstacles at the foundation. People spread out, lacing tricks on the PVC up ledge to 9 foot drop, and the other boxes in the lot. Peezy tried the gap, J Bah took the 9 foot drop off the up box to his hip, and Chris cut his hand on the broken rear windshield. At this point, crew moral was low. Everyone was tired and things were getting risky. Pretty much everybody other than Garret Slobey’s crazy ass had had enough, and we decided to call it.

So what do you do with a lot full of rollerbladers, cinder blocks, and a junk car that has a rail on top and no windshields?

You treat it like the Street Fighter bonus round and fuck that car up. The crew started breaking the remaining 3 windows with cinder blocks and skates. Somebody even opened the back right door, and Chad Anthony launched off the kicker straight through its window. Once the windows were all gone, we kicked the headlights, taillights and break lights into oblivion. We really put the hurt down on that Dodge Neon.

3 Hour break
Just enough time to get a slice of Soul Food at Jack’s, fill 2 kegs, and prepare for the ultimate house party.

House Party
My house. Pool Table. Trampoline. Firepit. Friends and Neighbors alike, there were like 80 people packed in my 2 bedroom. I can’t even count how many chicks were like excuse me, where’s the door to your bathroom?

Around the time we tapped the second keg, say midnight thirty, we decided to have a judges meeting to determine the winners. All the judges, including myself, got a fresh beer and went into a heavy debate over the day as a whole, the competitors, the competition, and ultimately who would become this years victor, and take home one thousand dollars cash.

One hour later
The crowd was getting ansi. They wanted answers. So we took a poll, tallied it up and herded everyone outback to hear the results. I stood on the back porch banister, beer in one hand, cash in the other and my brother by my side. We looked down at the crowd. My bladers, my friends, my neighbors, and god knows how many strangers. There was a break in the noise and I took my chance. It sounded something like this:

“I would like to formally thank all you mother fuckers for fucking coming to my fucking event! You fuckers made it happen, and without you, I wouldn’t be on this fucking banister!”

Anyway I’ll cut to the chase.

It was one of the best days of my life, and I can probably say the same for Smith. In any case the rest of the story is pretty predictable, we all got shithoused, the kegs ran dry, Smith passed out in the laundry room, covered in beer, Olmstead ran around the house with a pair of scissors and cut Sizemore’s t shirt in half. There was some slapping and some hugging and some good old fashioned fun.

See you next year!