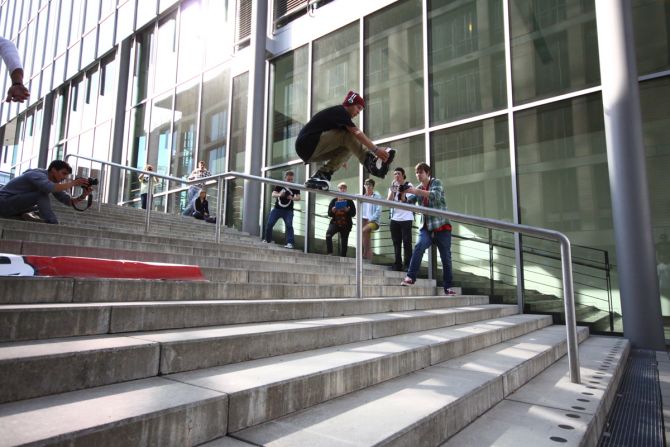 The first spot was the meeting spot which was the skate park. Down ledges, up, across down ledge, launch to ledge – there was an eclectic amount of obstacles to get crazy on which skaters most certainly did. Cyril Daniel who was late to start his round either because he didn’t hear his name or more then likely I messed up the pronunciation of it did a massive disaster hurricane dark side top soul. Lucas Landthaler who has got some serious style was ripping it up all the way through his round. Possibly the nicest back roy budget true top porn around. But the immediate attention was drawn to him when he laced disaster darkside true soul. Daniel Gourski was someone who is a known name after his appearance at this Chosen Few comp. Lacing such switch ups as back savy budget top soul. When this kid gets on a trick right he’s got a relaxed fluid style that sticks in your mind. Chris Hack also getting real steezy catching everyones attention with his fishbrains both ways and half cab top soul up the ledge. Eugen Enin lacing all sorts of good switch ups in his round. Soul gap 3 soul, soul hop mute top soul and also laced the hurricane fish brain on the down ledge. But my favorite trick of the round not necessarily the most difficult but by personal preference was Jo Zenk true acid up and across to top down on the up flat down ledge.

We all walked or skated to spot #2 which were the nice black rails skated the previous year at a different comp. The ledges above the actual spot made a good place for people to stay warm. Eugen Enin and Jo Zeuk were attempting the true fish refund on the ledge but could not get it properly enough to earn their entry money back. Chosen Few is pretty specific on the true fish regulations. Exceptions are only present if the spot is big enough.

Anyway, spot #2 went off and getting back to Jo Zenk on a more positive note he was successful at these rails throwing down all sorts of solid tricks stacking his points high. Sweaty both ways, acid both ways, savanna, 3 miszou. Cyril Daniel was all over this spot though. 450 front farv, 450 roy to ao fish, true farv, true top porn, true fish with a grab 180 out earning himself a refund. He let go of the grab for a second but we gave it to him. The rail was just big enough to make up for that mistake. Back slide, Ao top acid 3 out, and a 270 back back slide to acid. Christian Obermaier laced a solid fast slide but was followed by Sacha Lopez with a back fast slide. Dave Mutschall laced switch up after switch up and attempted the full true porn but decided that it was a one try thing because he still had the finals to deal with. We unfortunately for some and fortunately for others got kicked out and headed to a nice down ledge where skaters like Petri were glad to be lacing perfect fishbrains and Mo Lamred AKA “Do not get in Mo Lamred’s way” did a nice true royal. Also Jan Niehus did some great switch ups. Gagi Wagenblast was trying to hit a deadly trick on the dumpster beside the ledge just for kicks. And yes, a negative fish brain did go down on the ledge.

Finals got crazy as everyone probably knows by now. What many people don’t know are that some of these amazing tricks were done twice because of a Chosen Few comp rule. “You must land your whole line for any of the tricks to count. Does not matter if you do hurricane fish as the first trick of your line and then go for a little royal and miss. Your first trick does not count!” So land that little royal or don’t bother. Therefore lines are scored higher for the most part. So when Eugen Enin did top soul to true farv on the kink and then missed the royal on the double kink his trick did not count. Of course it’s Eugen Enin so he did it again next try but decided to skip the roy after. It’s also why Cyril Daniel got such a high score when he did 3 top soul revert true top soyale to fakie then went right into a full back roy to back savanna on the last down of the double kink. But other obvious honorable mentions go to Dave Mutschall with his sweaty to true acid. Christian Obermaier upping himself from last year’s Stuttgart comp with half cab top acid gap true top porn. Jan Niehues, the youngster, lacing switch up after switch up surprising everyone including himself it looked like. Jo Zenk staying solid. Adrian Deck breaking the land speed record with fastest back royal on a double kink. Lucas Landthaler staying steezy with zero back royal the first kink then zero back royal the second kink in a line. Eugen Enin again for the top soul to 360 in spin soul. But to end it all “Disaster Hurricane Top Soul.” All you can do is sit in amazement!

This competition was successful on a ton of levels but what really made me happy was I got to see some talented new skaters I would have usually not been able to see had I not been present. I got to see them skating at their highest level. I also got to put on an event that made skaters and spectators happy and hopefully a day they remember. Not every skater walked away with money or points but they did walk away having had some fun and with some well deserved recognition for their skating.

Thanks to Maik Le Jewski and Daniel Prell for helping ACHOSEN-FEW.COM organize such a great competition. Once again a big shout out to Grindhouse skate shop our premium sponsor and everyone who came out to make this event as awesome as it was. I hope everyone had fun because ACF can’t wait to make it bigger for next year.