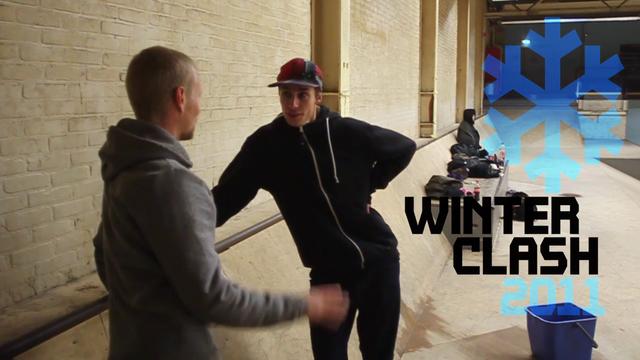 Jojo, Winterclash 2011 is around the corner. How is your mood? Stressed, chilled out, excited?

A good mix of everything. It’s way more chilled than last year’s organization process, the risk is lower, and it’s already sold out. That’s the good part, I guess. But at the same time it’s sad that some people can’t be part of the show this year, due the fact that there aren’t any more people allowed in the building. But yeah, I can definitely say I’m excited how it’s going right now. Just got back from Eindhoven where we had some great meetings.

We heard there will be some special guests at this year’s Winterclash that haven’t been announced yet. So what’s the deal about this? And what else hasn’t been announced that will make us all even more excited?

As far as I know we announced everybody already. Special guests this year are people like Tom Hyser and Andy Kruse. Also Rob G. and David Sizemore will be there for the first time. Shima is coming back with the team and a big surprise in his backpack, Razors is bringing the Pro Team, Valo is coming over with Broskow, Julio and Bailey and USD is bringing Eisler and Sagona. Jon Elliot will be there as well, but probably not skating. I guess that’s it for now.
What else hasn’t been announced? I guess the specials… In the beginning of next week we will announce a special competition going on Friday night as well as the big premiere which will also take place on Friday.

What changes will be made to the skatepark? What are you planning out? You got some sketches for us?

We don’t have made the final sketches yet, since I just got back from Eindhoven where we talked about that. But I can promise that the changes we have planned are sick and that it will be a little bit different to what you’ve seen at Winterclash’s before. No big grind-box on top of a quarter pipe this time. Expect more information in the next days as well.

An After Party hasn’t been announced yet either, but you are in talk with different people in Eindhoven. So what’s going on?

This is something we could also sort out this week. The official information will be published next week but I can already tell you that there won’t be an official Afterclash like you know it. This year we chose to do it a bit differently and leave the decision to the people. There will be a meeting spot to party and drink, but there are also tons of other options. More info coming soon.

You got some big names on the riderslist. Do you have one rider you are looking forward the most to see him ripping on the course? And what else makes you excited for Winterclash 2011?

Hmmm… I have to say that I’m looking forward to meeting Rob G. since it’s his first time at the Winterclash and he always has been one of my favorites. Next to that I’m looking forward to see what everybody will make out of the new ramps. And it will be nice to see everybody standing next to the final spot again and having this intense atmosphere from the last years. I’m excited about going „Back to Basics“!

On an additional note: for those of you that don’t have a ticket, must content themselves with our live coverage. We planned some great things this year! Stay tuned!