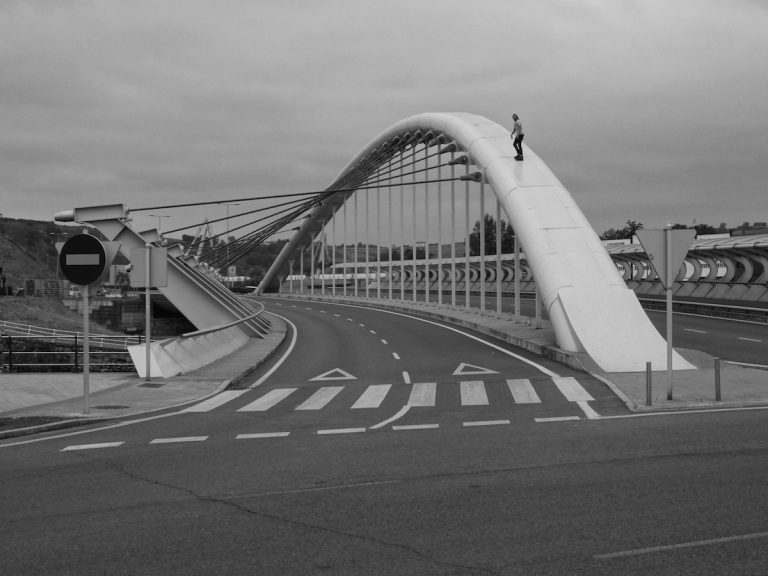 Marc Moreno gave us a little introduction about this year’s Balas Perdidas Tour in the first part of this tour life feature. Now it was time for Chris Dafick to tell us a little more about their trip, accompanied by a bunch of nice photos. Take a look and start planning your own little road trip for 2015. Tour life is good life!

For years now, the Balas boys have been doing road trips all over the beautiful mountains, valleys and beaches of Spain, and this summer was no exception. This is the second trip I was fortunate enough to come along with on the journey, and I hope to hell that it aint the last. We set out on our journey in early July, giving me just about 2 days to recover my bones from Summerclash and my brain from Roskilde. Which is a whole other story…. But for now let’s stick to this one.

Paco Rey and Teles Angel took the bus from their hometown of Valencia to Barcelona, where our trip was birthed. Marc Moreno, Tony Cheetah, Steve Gasstation (who just so happened to be taking his holidays overseas this summer) and myself scooped up the homies straight from the bus station downtown, and wasted no time hitting the road. We were out, officially beginning our journey traveling down the highway into the sunset, in the beautiful mountains of Northern Spain.

Our first stop was about 300 km and 3 hours West: a city called Zaragoza, a rad little city that is cut by Ebro River. Met some locals, skated well into the night until Marc got pulled over for skitching a Mercedes. They gave him a ticket for sktiching along with a bonus fine for having a little grass on him… Cabrons. The cops then proceeded to walk across the street and search us as well for no reason at all but to be assholes, but luckily the Policia in Zaragoza is not familiar with the inside pockets on my Levi’s jacket… Fuck em. Don’t let the man get you down.

After the ordeal with the Policia we went to our casa for the night… Which happened to be a skatepark on the river, under a bridge. Woke up in the morning brewed up some coffee and hit the streets. Skated all day, then departed to our next destination, 200 km Northeast to a town called Vitoria. Vitoria is another cool little city that has quite a bit to skate. We had our buddy show us around and everyone got some deals. We skated into the night then we decided to head to camp… Which for tonight happened to be in a bush, in an old construction site. I’ve slept in worse.

We skated Vitoria for 2 days and found quite an onslaught of unique spots, this bridge being one of them. On our last day there Marc tried one of the biggest gap to banks I have ever seen and unfortunately, on his 5th attempt the rough concrete took a pretty decent sized chunk of out the homie’s left ass cheek… Forbiding him to skate for the next week or so. With Marc in the back seat to recovery, Paco manned the wheel.

After that ordeal we set up our gypsy kitchen equipped with a portable stove and some pots and pans, had ourselves a little feast in the park, one more session and then hit the road. This we drove just about an hour North and hit the ocean, in a beautiful town where the rivers meet the sea, a city called Bilbao. Bilbao was explained to me as a city with spots as good as Barcelona but crammed into a small city, and that was exactly what it was. Bilbao had some of the most incredible architecture and the raddest of skate spots. We spent about 5 days there taking the streets by storm.

On our second day we added a new troubadour on our quest, a good friend of ours: Leon Humphries. We picked him up from the airport and brought him to where we had been camping, a quiet little park ontop of one of the hills, which also happened to have a pretty nice mini ramp right next to our tents. Leon and myself had a little session to start the day, then we set out to the streets. The next couple of days were bliss, perfect spots, high energy, positive vibes, and good times. Leon was on a tear. Not being affected by the giant gash and stitches on his knee, the dude annihilated everything until he practically couldn’t walk, wake up the next day and do the same thing. It is really a treat when you get to see one of your homies in that mindset, just fucking on it… It is truly an amazing sight.

We did what we were meant to do, enjoyed the beach, the spots and the scenery for the next few days and then headed out on our way to the next destination, a truly incredible city on the sea: San Sebastian. On the way there we had to stop in this small town called Zarautz to enjoy the beachfront vert ramp, and the most incredible high dive into the water that we had to indulge on.

After taking in the scenery, a good swim and jumping a few dozen times off the high dive we finished our trek to San Sebastian. This ocean front oasis was, who would have guessed, stacked with spots! We found a rad little mountain to camp out on, would hit the beach in the morning for some showers and relaxation and then hit the streets. We also had a nice little surprise in store for us that we were not aware of: there was a free blues festival the whole time we were there on the beach and on the first night we arrived… Ray Davies from The Kinks played a full Kinks line up. It was a special night that we were not expecting and I don’t think any of us will ever forget it. Tony pulled some babe and we had to go meet him up a couple towns away, but we ended up meeting him at this badass concrete vert ramp on the beach. It was too perfect.

We spent the next couple days storming from the hills, raping the city of its spots, and then retreating back to our gime in the hills come nightfall. It was pure bliss. On our last day in San Sebastian we lost 2 from the crew. Mineroh and Leon caught a bus to Barcelona to attend to some personal matters. As for the rest of the crew, we were still a little hungry and in search of some adventure.

We headed back on a similar route to the one we came in, stopping in some places to take care of some unfinished business. And on the final stretch of the tour, Marc being just about healed up from his early fall, he was hungry and wanted some vengeance. We went back to the massive gap to bank to try his luck. Snake eyes… No dice, he went down on one of the hardest falls I have ever seen… Scorpioned. It was a mean one and left us all with a sour taste in our mouth. With our mind and bodies being beaten and battered we decided to head on back to the base camp, hitting the highway home to Barcelona. We turned up the stereo, hit the gas and headed out… Another mission complete, one more notch on the belt and a whole bunch of stories to tell the grand kids.

Thanks for the good times my hermanos. Until next time… Salut!