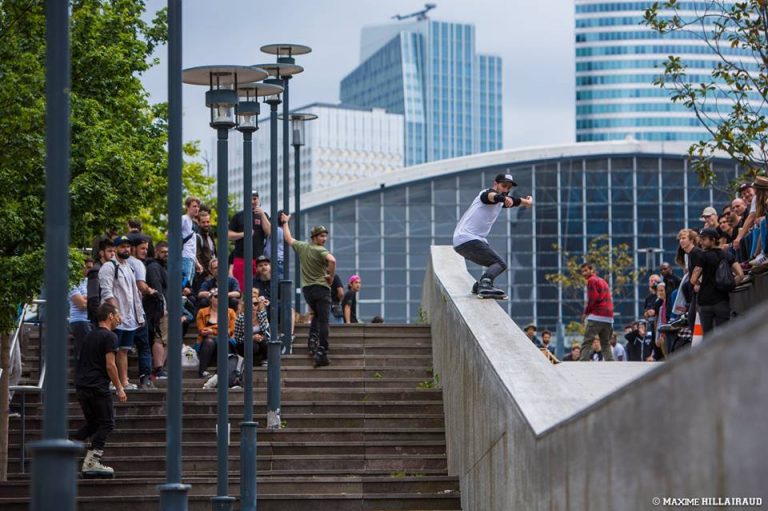 Cavin Le Macon shot the edit witnessing the insanity that went down at the Shred Da Ground comp in Paris, but we finally got some written insight into the motivation and people behind one of the biggest real street comps in Europe today, from organizer Lucas Spenle. The fourth edition of the “Shred da ground” took place in Paris on June 3rd in the legendary district of La Défense. The day was magical, the crowd was all thrilled and the rain spared us, but most above all Shred is a long story of French rollerblading movement. The “Shred Da Ground” was born during the FISE 2015 in Montpellier. We were watching the slope style and realized that this show had no longer anything to do with what had brought us to rollerblade when we were kids and with what had transformed into a lifestyle during our youth. I’m talking about the IMYTA, the X-Battles, the VG and all the videos that each of us have seen on repeat. The FISE was a debauchery of cascades and heads down, all for the victory over modules completely out of place. But the crowd and the other disciplines saw in it the image of rollerblading whereas we only saw in it a masquerade, certainly amusing but that was a tragedy for the purists like us. A decision was made, it is been in my head for a long time, and rather than criticize without doing anything we decided to try to create a classical street contest, respecting street rules that make the success of this kind of event: the confidence, the street spirit and peace. After a few months of work with Al Barbuto we found an impactful name that created a base for the following events: Shred Da Ground. Amir Roti, the designer of “Complo Clothing” joined this adventure with his talent and made the design of the flyers for our first event in the streets of Grenoble. That was a donkey hanging on a purse filled with gold, the message was clear. The community supported us, the partners too and the riders came from all over France. It all went perfect. The principle was simple: three spots where everyone could express themselves. No rating scales, just engagement, style and motivation. We found our formula, people approved and had a good time. The skaters were really expensive in their skating, and as in every good street contest a wild evening party in the forest was organized or the craziest off us. The bet was successful and the adventure has been launched. The Bordeaux edition came a few months later with even more people and good times. Partners followed and the skaters validated it, it was time to thought bigger. The idea of ​​Paris appeared naturally. Then one year of preparations, step by step, and lots of hope. Amir was always with us and created the third “conspiracy”-inspired flyers. Things got really hot when Trigger Skate proposed us to be the main partner with 1000 euro prize money. That changed everything! The machine was launched and we have chosen the downtown of Paris as a place for the contest. It was the legendary Defense where IMYTA took place a long time ago. Now the idea we had became more and more concrete. This “Shred Da Ground” has changed everything for us.

The atmosphere was electric, the most nostalgic participants and the youngest ones found what they were looking for. Skaters from all Europe made the trip to confront each other in a debauchery of energy and insanity. The level of skating became crazy on the second and third spot up until a final battle for victory between the young Victor Daum and the master Eugen Enin. Two different styles, so difficult to judge. Victor finally won using his last piece of energy for a last hammer trick. The street was talking, the scene was watching and the youngest ones were learning. The year later was full of troubles and uncertainties and I really thought the adventure stopped there, but Tom Thieuleux and Stan Kogutyak propose to me to restart the machine for a new edition still in Paris, still in La Defense. Their motivation and their work brought a new vision and everything worked out well. Partners supported us in their own way once again, the community participated in crowdfunding and added to the prize money. All together with “Complo Clothing” we collected 700 euro. But the weather forecast was bad, the Parisian tension of ultra security because of terrorism became very tangible. Until the last second we really believed that everything will fail. But magic happened, the rain left us in peace, security gave us the total freedom and once again the street could express in a crazy debauchery of slides and engagement. From spot to spot the skaters were selling dreams to the public, our speaker Mr. Thomas “Bukette” spit in his voice the energy that everyone needed up until the final in front of the arch of the Defense, legendary and central spot, that many generations of skaters had skated before us.

Sam Crofts and Guillaume Le Gentil clashed technically for the victory, but the Londoner finally took the first place in front of international finance, passers-by and the public in trance. The first drops of rain fell on us during the awards ceremony, the spirits calmed down, the magic of the moment and the emotion took us away of reality with accolades and total peace, the “Shred Da Ground” 2017 was finished and our hearts now were full of memories forever. Now we turn our eyes to the future, to new projects. We are already thinking about a future new edition. The formula is working, the street is talking and the scene supports it. We need to continue this adventure. And the make sure to share this with everyone, the next will be even crazier. A big thank you to all those who supported us from the beginning, at Be-Mag who gives us the opportunity to tell our story, Cavin Le Macon whose omnipresent eye see everything, to all our partners without who nothing would have been possible. The ratz who make the street live, to Mr Amir Roti who created an impactful visual identity for us with his works, to Nelson, the eternal guardian of our ideas, to Tom Thieuleux and Stan Kogutyak for giving me a push, and to all the others who support the Shred in their own way. See you next year.
Peace and Love.
-Lucas Spenle