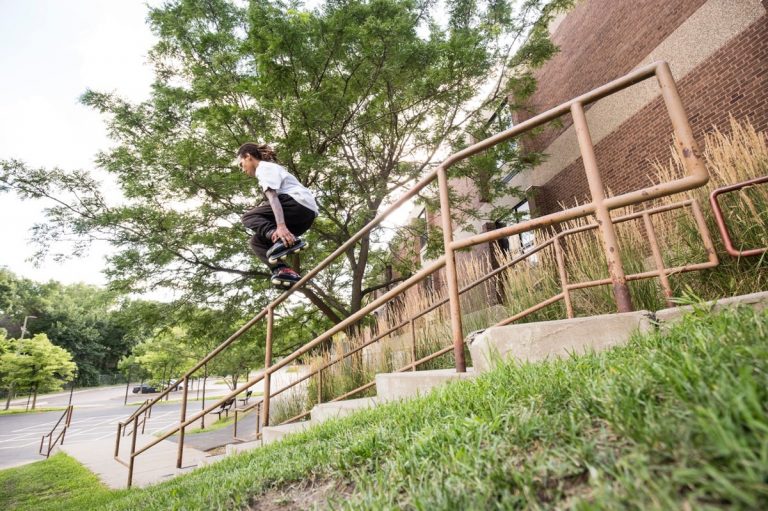 NEW SECTION AND CHECKING IN WITH CHEMI SIMIYU

Trying to get your name out in rollerblading is a lot easier today than a decade or more ago, with social media and cheap video equipment accesible to almost anybody. However, trying is not succeding, but there are people who, thanks to their talent and effort, get recognition from the rollerblading world, and also get sponsors and get to taste the life of a sponsored blader. Such is Chemi Simiyu, a Rollerblade sponsored cat that lives in Fargo, North Dakota. His new section is sick and he’s an interesting character to talk to. Dear Chemi, you live so far removed from the meccas of blading in the US. What do you see as the major downsides to it, and maybe some upsides to the same situation?
Yea, being from Fargo, ND is pretty far from everywhere. The main downsides would probably be that there aren’t many skate spots or people that skate in town but I’m not too far from Minneapolis, Mn which has the opposite going on. Upsides I would say would be how I typically am when I do get into other cities that have spots I take full advantage, a lot of people either know me or know of me here so I’m able to get away with a fair bit when I do go blade out and about.

You’ve been on the RB team for a while now, maybe you could tell me something about how does the team work? What are your obligations as tem member and what do you get in return?
I’ve been on RB for 2 years in September, the US team consists of a pro team, and a flow team (just product) and I’m kinda in the middle somewhere around am/flow, they don’t really label outside of the pro team. I don’t really have any obligations, they just like me to send them content as far as photos and clips for their social media accounts which I do a fare bit and in return I get product and a yearly travel budget.

Who do you skate with most often?
Most often would be my dog or solo, there’s a few dudes in town that blade but we don’t er out together as often as I like, lives run on differing schedules.

You’re only 24, but I’ve seen you with a kid. Is it yours?
Yep! I actually have 2 kids, a wife and a dog ha, a 3 year old daughter, 7 year old son I adopted from my wife’s previous, and 1 1/2 year old pit/Rhodesian ridgeback I’ve had since he was a born (old neighbors litter). Do you skate a lot with Cameron Talbott? He’ s an extremely stylish skater. What do you think about the team roster at Rollerblade? Also, have you already seen the new street skate that is about to be released soon?
Not super often but whenever we’re near we make sure we get together, we talk fairly often on the phone, Cam is a really good friend of mine even before the RB days; he’s a great guy and definitely holds it down both on and off the blades. I think the RB team is awesome and love being a part of it, a lot of different types yet all stylish Blader’s around the world. I’ve seen a few pictures and heard things about it but haven’t inquired to know a whole lot about them, I trust RB and am sure it’ll be a great product.

Do you think you will have a chance to travel to skate anytime soon?
I hope so, there’s not many events in the Midwest like there were a few years back so outside of like Minneapolis, MN a few times probably laying low until next year unless one of my sponsors decides to send me to another event this year.

Thanks for your time, Chemi.