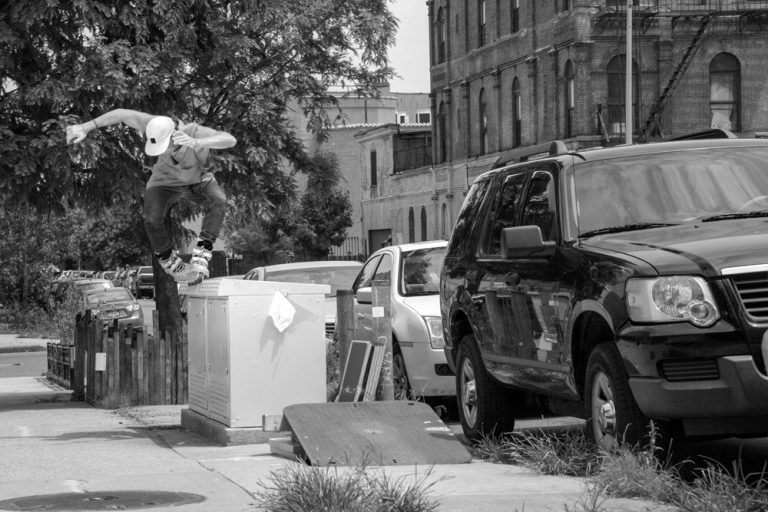 Photographs by Ryan Loewy for Be-Mag “Filming in downtown Manhattan on the weekend is tough. Filming in downtown Manhattan on a weekday is worse. Filming Justin Brasco in downtown Manhattan on a weekday in 100 degree weather is just stupid.
I thought I had it bad dealing with crowds of clueless tourists, angry natives, and security until I looked over at Ryan and saw him trying to set up his multiple flashes on stands for the right shot amongst the hordes of people who casually walk in front of our lenses as well as Justin’s path of skating. It was frustrating at times but it was also very fun as well.
Filming this reminded me of the “old days” when skating was the priority over school. I was tempted to shoot this with a GL1 for added nostalgia but I don’t have the hardware to capture mini dv tapes anymore so I settled for whatever Panasonic camera Justin had in his stash. It was nice to film together again and it was also nice to catch up on life and laugh at old jokes/stories that were unforgettable. We covered alot of ground skating downtown and aside from lugging heavy bags of gear on our skates in the hot blazing sun and humidity; there’s something about cruising around downtown Manhattan that makes me appreciate our home. Maybe it’s the aura NYC carries with it as the big city of dreams or maybe is just the sheer chaos and in your face attitude. I couldn’t tell you but nevertheless we still got the job done and even though we agreed not to work like this ever again–we probably will.
Cheers!”
–J.P. Primiano True X Grind in Brooklyn in July of 2018

Back in 2000, life was simple. My main focuses in life were:  pizza and skating. I would leave High School early to head to Queens so me and JP (@buttertv) could get footage for projects like VG Battle My Crew, a Nature Skate Video or one of the videos he was making at the time. These were some of the best years of my life. Almost 20 years later, I’m still here leaving work early to work on projects with JP. It’s not as easy as is used to be to just cut out of school, but it’s just as rewarding years later. Currently I own and operate a very successful branch of a Bank / Direct Mortgage Lender and a Real Estate Company. I employ family and friends and the stress is utterly insane. I’m on the phone handling issues from morning until night. I’m originating over 40Million in business each year. I never in my life would have thought that this was the path I would have went down. However, if I wasn’t still skating there would be no way I could deal with all of this. Skating is my escape. Its how I stay sane, its what motivates me to keep going and go further. When we decided to get together again after all of these years to begin working on a few things, I was ecstatic. I would wake up at 7am, get all my work/emails out of the way and then hop a train to go meet up downtown. In between skating from spot to spot, getting thrown out, putting my skates on or recovering from a fall, you could find me answering emails or on the phone with an employee/client (most likely yelling). We would pull up to a skate spot downtown in the financial district (Wall St) at 2:30 in the afternoon on a Wednesday amongst all of the suits, the stress, and the chaos. These “adults” would look at us: in our 30s, wearing rollerblades, covered in sweat and just shake their heads. They would look down on us. They probably think were just punks / losers who are trying to run from “adulthood” – I guess some of it is true. It was very hectic and stressful but, I loved it. A narrow top soul amidst the Wall Street madness

I loved making this edit with JP and as well as having Ryan Loewy along with us shooting photos. I’m very thankful to them. 20 years later, were still here. Still skating at 35. Still making sure to find the time. Still getting hurt. Still waking up early and going to bed in pain. Still here and not going anywhere. Thank you Jp/Butter TV, Ryan and Be-mag for this opportunity.