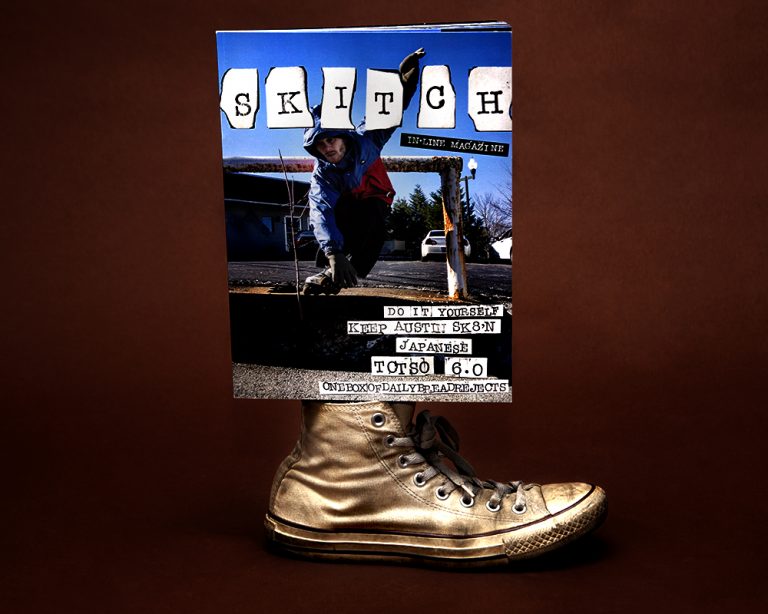 IN THE KNOW | THE MAKING OF SKITCH CUATRO A rarity it seems these days, print publications are far and few in between in the rollerblading industry. In recent years, while its continuity and quantity has diminished, a handful of individuals have taken it upon themselves to produce their own print efforts. Justin Chad Anthony is among that class of DIY-print purveyors, and with his latest release of Skitch Zine, which now sees itself in 2018 with its 4th issue, we felt it fitting to sit down and ask him a bit about the project. How did Skitch originally come to fruition and who is involved?

Skitch was developed to showcase a set of photographs taken on disposable cameras for the late Cult Revolution for Haitian Magazine issue Earth. That story fell through, and the content was not picked up by anyone, for online or print use. Not even the skate manufacturer promoted being promoted would rightfully print the photos. I was determined to see the photo’s utilized as originally intended. Therefore; Enter Skitch.

How do you go about corralling stories and laying them out?

The stories are usually put together by the universe. I just keep skating, and documenting skating. The content provides itself accordingly.
The words are created by yours truly. As always, the photographs came from myself and other contributors. This issue Joseph Gammill from Austin, Texas threw in a folder full of photos. A bud, Colin Batu tossed in a grip he fired off at last year’s contest. That’s where the back cover came from, it’s Ray doing Truspin Dark Star (skitch is an  advocate for that name change). Yuto Suzuki and Yuto Goto went on team missions and sent in a full spreads worth. Them Tennessee Boys even chipped in some. Zach Leavell did the printing and cutting of the final product again. It sits at a standard 8.5×11 How long is the process in terms of getting everything sorted and printed?

The cover is the oldest capture of the entire book. It’d be cool to answer that question in more detail, but I’m going to opt out.

You’ve done 4 issues now, what is the goal for the next issue? Do you plan on changing anything in terms of your approach?

Maybe, approach with intent to create more issues? Goals for the next issue include getting more current in-line skating brands/companies/ideas involved with advertising. If you got something in the works, lets put these things into tangible history! It could maybe be cool to host other writers, or develop some sort of column that could spark new readers. I was a fan of Daily Bread’s DISINFORMATION section. (SEND ALL SUGGESTIONS THROUGH CONTACTS ON WWW.LONGLIVEROLLERBLADING.COM) Def trying to bring back the set-ups section.
Who even knows if another will happen. Cuatro is here, and that is key! Shout out BE MAG MAGAZINE for many years of in-line publications. Skitch Cuatro highlights a myriad of subjects, including the Too Cold To Skate Outside competition photographed by Colin Batu and the Japanese scene. The Back Cover of Skitch Cuatro features Ray Kronenberg dialing in at the Too Cold To Skate competition, photographed by Colin Batu.