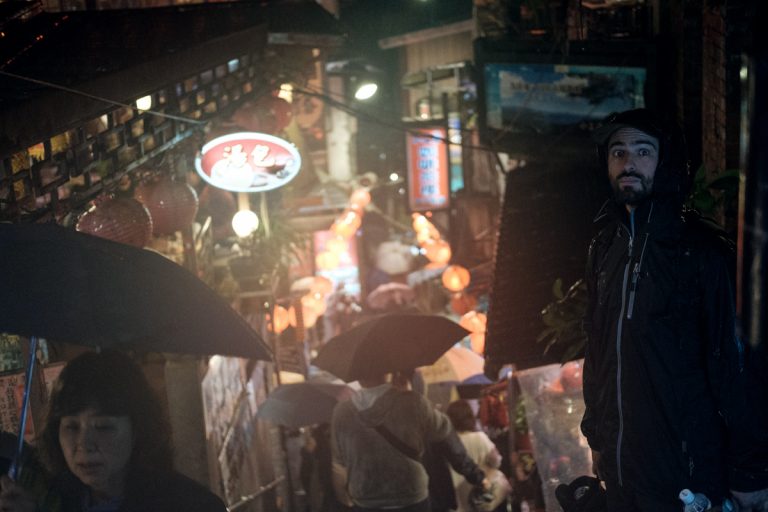 FORMOSA IS A BIT OF MATH AND A WHOLE LOTTA LUCK

You all know the team that goes on The Cayenne Project tour videos. David Sizemore, Chris Smith, Josh Glowicki, Chris Farmer, Richie Eisler, Dominik Wagner, Scott Quinn, Carson Starnes and Joe Atkinson, with filmers Karsten Boysen and Benjamin Büttner. But the man handling the plans, budgeting and the logistics behind the ventures has successfully kept himself in the background. It’s Freddy White, one of the most dedicated people in today’s rollerblading, and I’m very proud to be able to call him a friend. Instead of talking how great the Formosa tour was, we talked a bit about how to set up and manage such a project. Get Formosa here. OK Freddy, what the fuck were you thinking dragging the Cayenne guys all the way down to Taiwan?
Hum, “Let’s have a good time with the gang”, I guess?

But seriously, I remember when we spoke about the second Cayenne tour project, Delfon Dio, and one of the ideas was to go to the Croatian coast to film but you went with Greece and it turned into an epic film. The same is with Formosa.
It’s always a fine balance between improvisation and actual planning. For instance, we realized traveling around the Balkans might require a bit too many visas and too much paperwork for such an international group. So we went with Greece, and digging a bit deeper, found the gold that you’ve now seen in Delfon Dio.
The story is pretty much the same with Formosa. We were thinking about some pretty remote locations in China but the whole visa process there is truly a hassle. Also, it might not have been that fun hanging out in ghost towns, lost in the desert for three weeks after all. I believe Carson mentioned Taiwan, which is a lot less hectic and people are usually easier to communicate with. And the icing on the cake: It doesn’t require any sort of visa. Getting in touch with the locals, we connected with Tien, and then Po-Tsang, and the fate of our third tour was sealed!

You’re the man behind the scenes. What does it take to create the budget and to keep all these people together for weeks?
It takes a lot of dedicated supporters that actually purchase our videos. Rule of the thumb is that sales represent about 90% of the actual budget (the other 10 would be our beloved sponsors). So without the direct support of our viewers, there is simply no tour happening.
And to be perfectly open about the money: No one has ever taken a single € for themselves. Not the skaters, not the filmers, not our support team Guy & Jonas: No one. We function as a non-profit organization: All the money coming in (and not spent on taxes or Paypal fees) from one project goes into funding the next one. Pretty simple.
As for how the money is spent: Once we’ve somehow figured a time and place that works for all twelve of us, which might be the trickiest part of this whole thing, booking plane tickets for everyone is obviously the biggest expense. Half the budget in the best case, but usually closer to 2 thirds of the overall expenses, probably around 10K or so. So with the third that’s left, we’ve got to handle local transportation, housing, car rentals, a little per diem for the skaters, and potential police fines and parking tickets. Whatever is left will most likely be eaten / drunk… But we’d starve in a matter of days if we’d have to rely on that, and everyone is still funding most of their daily expenses.
So in conclusion, it takes a little bit of math and a whole lot of luck for this whole thing to work out! When you ask for support from skate manufacturers, what’s the actual feedback? Do the companies still see this type of format as a good advertising vehicle, and if not, why?
I think they all see the positive aspects for blading as a whole with these types of projects. Yet there can be budget issues for some of them when they can’t actually afford to spend money on their own marketing/advertising. Other larger companies might be reluctant to invest into another VOD, as they argue only a limited audience will be exposed to it. In the long term though, all these videos are eventually released online for free and thus have the potential to reach a wider range of people, through social media for instance. So it depends on the timeline you’re focused on.
Overall, the feedback has been amazing and judging on the emails we’ve received, I’d like to think all of our sponsors are glad to contribute to the end product and help these projects happen in the first place. So now is my chance to thank them all again for backing us up and helping push this blading thing we all love and believe in so much: Thank you, dear friends!
One thing I’d like to develop in the future is closer relationships, especially with the shops, in order to create special media, collaborations and items that can put some money in their pockets in return. So far every physical product we’ve made is in such limited quantities that it’s pretty much impossible for the shops to turn an actual profit with such small margins. So that’s really something I’d like to improve in the future, so they’re a direct incentive for everyone associated with the project!

I know Roskilde was the birthplace of Cayenne. Now that it’s no more, how do you feel about it?
That place, and the incredible energy there was what brought all of us together in the first place, and gave birth to the idea of Cayenne itself. Now we can take that energy some other places and still pay tribute to Roskilde every time we hit the road.
I can honestly say that I’m all good with it. I made my own pilgrimage this year actually, although I left before the festival actually started. I got to see every stage as they were being set up, walked around the whole campsite, and said my goodbyes (for now). It’s weird seeing the empty space where the bowl once stood though, honestly I’ll miss that perfect piece of wooden artistry. But the festival is still happening, still has an incredible lineup, and who knows what can happen in the future? If miracles do exist, Roskilde certainly is the place for it. Bringing the Cayenne crew back to Denmark for an upcoming edition sure would be an incredible experience, that’s for damn sure! What do you think about the dedication of the Cayenne team, especially Karsten and Benjamin?
Admirable. I mean, it looks like it’s all fun and games until you spend half the year planning / organizing and the other half in post-production / release mode. This is just a side project for everyone involved, yet it takes an incredible amount of time to run it somehow professionally. And of course, no one’s getting paid, which also says something about dedication.
So to see people like Karsten and Benny, but also Guy (Crawford) and Jonas (Bødtker) put their own successful professional careers to the side just so bladers can enjoy another piece of entertainment most will try to get their hands on for free anyway does command a lot of respect.
As for the skaters themselves, putting their lives on the line while being paid peanuts, or not paid at all, skating hard every day for twelve hours, for three weeks straight… Same for them, they could be spending their time elsewhere, making actual money while taking care of their bodies instead of risking injuries every single day…
Yeah, in the end I only have one word to say: Admirable.

When you visited my place last summer, you were planning on going back to Brussels and getting your old job back. This somehow didn’t happen, but you ended up working with FISE, then going to Taiwan, and then we met up again at the Winterclash?
I did actually spend a couple months after the summer working and saving up whatever I could for the trip to Taiwan and some more traveling in Asia afterward. Once I got back to Europe in January, the old job fell through and new projects came in the way of “normal life” again. FISE didn’t happen until later in the year actually, first through you guys at Be-Mag to cover their events, then I was offered to help with hosting the live stream which is a cool new challenge, and does put a couple of dollars in the bank. I’ve recently started doing translation work as well, which is actually quite fun to do. Just like every new gig/skill, I guess I really like the learning aspect of it, so I’m looking forward to seeing how it evolves in the future. How do you make it work and how does your lifestyle compare to rollerblading in general?
I live 2 or 3 times below the poverty line, try to keep my vices in check, spend the little money I have on travels and work from the road. As of the end of August, I’ll be out of the squat I’ve been a part of the last 18 months and officially homeless for the foreseeable future. No home, no utility bills, one light backpack, a laptop and a pair of skates: That’s pretty much all I need I guess (full disclosure: I’m actually considering buying a new shirt soon though).
As for my lifestyle…  I don’t really know how it compares, I just think I’m a stubborn individual who’s worked quite hard to do exactly as I pleased through the years. Think nowadays, I’m pretty much doing what a 16 years old me would have dreamed of doing one day. So despite my empty bank account, I’m the happiest version of myself and in that respect, I’m grateful for everything life has thrown my way, grateful for the family and friends who’ve allowed me to become the person I’ve become grateful for the many things blading has taught me and the many places it’s brought me to.

We know that all proceeds from the first two Cayenne videos went into making the next one. You guys make this work as a nonprofit venture. Are you already planning on making the 4th installment and what locations are you thinking of visiting?
By the time Formosa came out, our account balance was zero: Now that we’re back in the green, all the sales help fund the next project. So obviously, our next destination will not only depend on our imagination, but also on how much profit we end up turning on Formosa. To be perfectly honest here again, the sales have been quite slow so far, and it obviously impacts our range of possibilities for the 4th project.
I’d say we’re about 60% of our ideal goal at this point. So if you’ve watched our stuff at a premiere, a friend’s or on the darknet, and you like what we do (and more importantly would like us to keep on doing it), please consider actually purchasing the video, or book, or shirt, or all of the above! But with or without that 40 % we’re currently missing… We’ll be back on the road at some point, even if we have to do it the gypsy way: We all love it too much to quit. What does make a huge difference though, is feeling the support of the inline community. In the end, if you have our backs we’ll have yours in return!