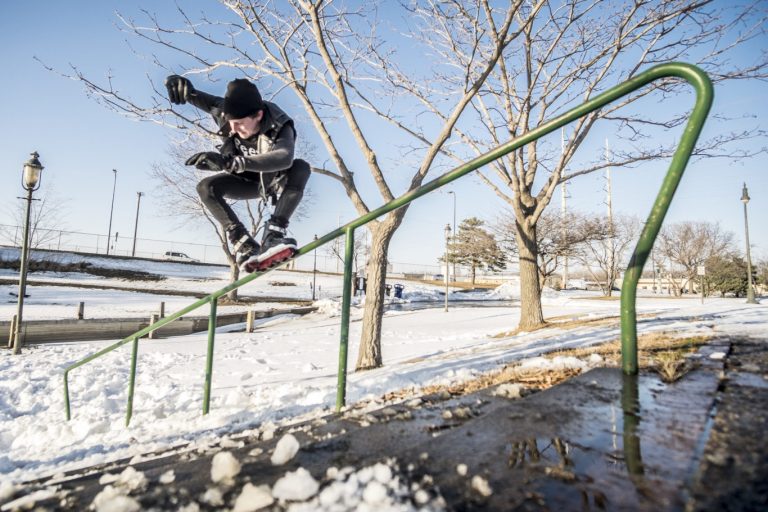 Farm and Friends – February and March in Minnesota from The Crow Video on Vimeo.

This entire 20’18” long edit began with the decision to point a cellphone at one of our weekly Wednesday sessions inside Hammond’s shop in Northeast Minneapolis. After the shop, we took it to the streets and began using bigger cameras. Mike had a sticky joystick and crashed a drone at Boom Island. Farm and Ham did a few tricks in the snow. The next week, in the shop, I pointed the pocket-camera at Farm doing a Julio soul and a backporn, plus got a clip of Freddy doing a loathing. I put that two weeks of footage into a sequence and made a homerail sandwich that was mostly centered around poking fun at Farm’s face-mask and associating him with Sub-zero. I shared a dropbox link of the sequence in our weekly session’s group text and I think the potential of an edit added some incentive to get the homies out in the streets for the rest of the season. We continued to session Hammond’s shop rail but it was clear that the focus had, rightfully, become the streets. This is something that happens in the North—the final leg of winter inspires a desire to shred and this season was no exception. While Chris’ name in the title likely led the majority of you to be reading this right now— the title, Footage of Farm and Friends from February and March in Minnesota, is simply an apt description with attention paid to alliteration. Farmsquatch was there for every clip but one. He certainly loves skating, he’s an enthusiast and a Minnesotan, whenever the weather was tolerable he was likely the one instigating the session. We didn’t initially set out to make this edit, it just kind of happened. Between Valentine’s and St. Patrick’s there wasn’t much difficulty getting a crew together and by the time the snow stopped sticking we ended up with a grip of footage.

I’m aware that this thing is longer than one of Trump’s stupid ties but a lot happened up here in the last 6 weeks. I also think that footage of us doing what we do during the snowy season works well with a more raw presentation— I hope that you feel the same. Enjoy— and Happy Spring Shredding.

It seems like everyone in the Minnesota blade scene lives in a different suburb. It’s not uncommon to have 5 cars at a blade sesh with 6 dudes in the winter time. We took over the parking lot at this spot and a lot of rad tricks went down.

I met Chemi on a blading forum a little over 10 years ago. The first time we actually met, he was 15 years old and tagged along with Brad Magnuson and I on a road trip to Detroit for a Bittercold Showdown. Chemi has been a frequent visitor to the Twin Cities ever since. He recently moved his family from Fargo to St. Paul, MN. He settled into is new home and found employment right away and has wasted no time getting to know the streets of Minneapolis. It’s been a lot of fun watching Chemi’s blading progress over the years and we are happy to have him here.

I first saw Ben do a Loathing grind at a street competition in Duluth, MN many years ago. I had a tough time comprehending what his feet were doing. Ben later explained it to me as a front (left) foot fishbrain and back (right) foot A/O negative makio. I tried to hold the stance in my shoes and just about fell over. Ben has performed many amazing Loathing grinds over the years and I was happy to finally get to photograph one.