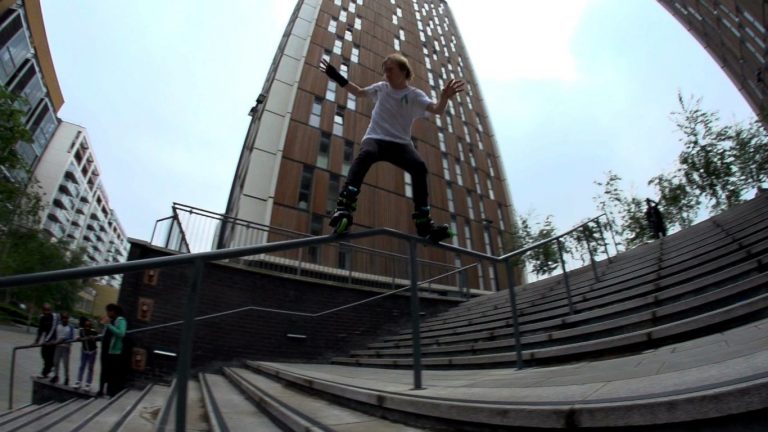 Every once in a while, there’s a bold marketing executive that tries to look outside of the box in a market niche and tries to do something different to show the competitive edge of the product he’s pushing.

And while looking outside of the box, it’s even less common that a market leader in any market decides to use rollerblading in a advertising campaign. The last time was probably when Oli Benet starred in that Stimorol bubblegum ad six years ago.

Arcserve’s Global Marketing Manager Louis Cadier is one of those people brave enough to turn things upside down a bit (obvious pun there, kids) and use the street blading skills of USD team rider Sam Crofts and the filming prowess of our usual suspect Remy Cadier in the advertising campaign for their latest UDP V6 solution. So, we got down with Louis hear a bit about how this project come about. Louis, what’s your role in the company and how did you decide to employ Remy to do the vid for you? And what did it take for you to persuade the company this type of advertising campaign is a good idea?

I am  the Global Marketing Manager for Arcserve.  Arcserve is an American company with headquarters in Minneapolis, we are one of the leading technology manufacturers for backup and availability software, appliance and cloud products  We have been in the game for over 25 years and our latest solution UDP V6 just won 14 independent awards in the last year.  Because we have such a strong product our message is clear;  we give mid-market  IT departments an enterprise feature-set without the enterprise complexity and without the enterprise price.  The products we sell protect the data and applications of our customers,, e.g. your company just got robbed and the thieves took all the hardware, the servers/workstations are replaceable but the lost  data is priceless…  if use our Arcserve UDP you will have multiple copies of the data, no problem  Or… there was a flood, all the equipment is fried and now  the office will be closed for weeks…. if you use UDP or Arcserve cloud you can restore your IT environment to another locations or even run your environment direct from the cloud.

So… how do i get from this to skating?

I really enjoyed the vid, watched the whole ‘making of’, the jokes are well written and the skating is top notch. Yep, City hopper is the most exciting project to show blading to the outside world in the past few years, imho.

Aye!!!  To your question you asked (and then I have lots i would like to say about Remy…. at Arcserve we are really obsessed about what we do, it might sound gloomy that we spend our days focusing on a disaster (that may or may not even never!)  But actually we are a very optimistic group of people, we derive so much satisfaction from making our customers “disaster proof”, it is a cheery business!

So, back to my question, was rollerblading a hard sell to the rest of the company management?

In our line of work so much is at stake… perhaps not as much as a free solo climber but entire companies can go bust if they lose data/services.  I was with my bro one day, we were going through some of his footage, he was editing the city hopper world video back then.  i was watching some of the clips, some wipeouts, I saw that skaters put EVERYTHING on the line, they go all-in, all or nothing.  this is a good analogy with the world of disaster recovery, when you make a decision you have to know what you are doing, there is no second chance, in the world of backup and disaster recovery no mistakes are allowed because you only find out about them when it is too late..  I talked to Remy about it and he showed me some of clips from  Sam Crofts… NOW THAT GUY IS ALL-IN. Yes, he’s one of the new generation kids that takes blading seriously.

What I can say is that no one had ever heard of an idea like this before, it was harder to get the money for this reason…. however when I fleshed out the ideas and showed them that we could engage our Partners (see Chris Watson the presenter in the in-depth race, he works for one of our largest Partners in the UK, CMS Distribution) when I showed them some of Remy’s work, especially City Hopper, I could communicate what this campaign was going to look like.

There were three parts to the campaign; 1. In-depth race which we launched as VOD, only available to subscribers.  The originality of the idea meant we got a lot of interest on this first section although, like many other marketing departments we still struggle with integrating YouTube with ‘Marketo’, the software we use to track a sale from initial interest through to a closed deal.  We learnt a lot from this first VOD launch, the next one will be even better.

The second stage of the project was to create a one minute high quality advert for Arcserve using the footage. It’s worth mentioning wI managed to keep the costs down by editing the first and second parts of the project. This second video had far more success, largesly due to its short length and simple premise. Besides Youtube/Vimeo  I uploaded to Facebook and we got some virality (FB will promote any and all videos for their own reasons.
We setup a landing page and to receive the link to the youtube video you have to submit your details.  Everyone who submits their info enters our pipeline and are either approached  or nurtured long term depending on their on-line  ‘buying signals’.

Have you bladed before?

Yes, I can blade.  I lived most of my 20s in South London … before the suits and the hipsters realised how quick as-the-crow-flies to central London, i could skate to work, skate to college.  I was just a getting from a A to B skater, no tricks, no bowl, no grinds, just a very fast way to get around London. That is cool. What’s your next step with the campaign? Planning on applying it to any awards if it goes well?

It has already been the most successful social media campaign we have ever run and that is without this third installment.  We’re hoping fo the most amount of exposure on this third part.  Once the numbers come in from this third part we will look at awards, the majority of feedback is really positive for anything that shows something new, the human race has become desensitized to the predictable.